Every Monday, The State Press will be taking a look around the Pac-12 men's basketball landscape as the conference tournament in Las Vegas nears.

The Pac-12 has been one of the more entertaining conferences in men's basketball this season, with three different teams gaining top 10 rankings this season. With so much talent at the top, the final few weeks of the campaign promises to impress fans as teams jostle for position in the standings with March looming. 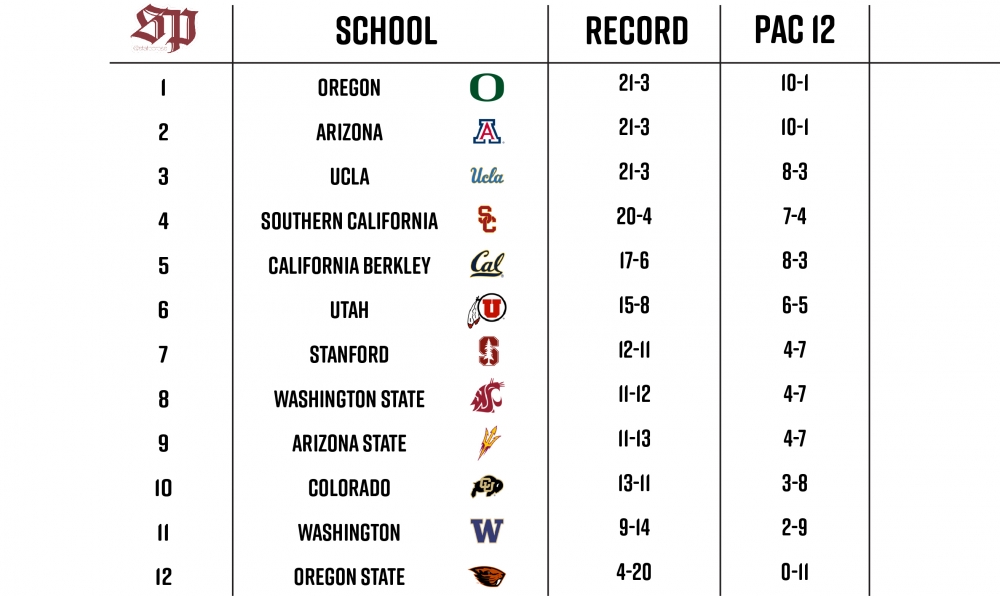 The Ducks seized the top spot in the power rankings and a top-five ranking in the AP Poll by dominating Arizona for 40 minutes. Even better, former Ducks Patrick Chung and LeGarrette Blount are Super Bowl champions again.

The Wildcats looked pedestrian at best in a Saturday afternoon loss at Oregon, a game in which they shot just 42.6 percent from the field. Arizona still looks to be a force to be reckoned with, but the Wildcats aren't invincible. And then former UCLA forward and color analyst Bill Walton did this thing on the UO campus:

Bill Walton literally hugs trees, bangs his head on one like a woodpecker asking for bugs to come out pic.twitter.com/FOqNOCSMC9

The Bruins needed two massive wins in Washington to keep pace with the top of the conference and hold its position in the top four of the league. Next up for UCLA is a revenge game at Pauley Pavilion against the Oregon Ducks, who handed the Bruins their first loss of the season.

The Golden Bears have low key won four games in a row, tied for the longest active streak in the conference. Sophomore forward Ivan Rabb continues to be a force in the paint, leading Cal toward a bye in the conference tournament.

The Trojans are the other team that is on a four-game win streak and the health of sophomore forward Bennie Boatwright could help them move up the ranks once again. Boatwright missed 15 games in a row with injury, but returned with monster performances this weekend, giving USC fans a glimpse of what may be to come.

The Utes lost back-to-back games in the Bay Area this weekend, despite two more double-doubles from junior forward Kyle Kuzma. He's been a revelation for the Utes this season and has done all he can to drag this team into postseason play.

The Cardinal got off the schneid with a win over Utah Sunday. They continue to confound with their inconsistency, but Stanford has been able to maintain a close to .500 record all season no matter the opponent.

The Cougars were swept at home by USC and UCLA this weekend, but senior forward Josh Hawkinson continued his dominant play. In the two games, Hawkinson combined for 32 points, 21 rebounds and 13 assists.

The Sun Devils lost to the first-ranked team in this week's power rankings and beat the worst, so we'll call it a net neutral. The ASU rotation continues to dwindle, but home games should help the team recover better and rack up a few more wins. At least three former Sun Devils won the Super Bowl, though.

The Buffaloes came down to earth Super Bowl Sunday losing at Cal, ending their three-game win streak. Colorado plays five of its last seven games at home, setting the Buffs up perfectly to make a run up the standings and get some momentum.

Freshman guard Markelle Fultz continues to be awesome, but the rest of the team is hot garbage. The Huskies have lost seven of eight by nearly 16 points per game despite the efforts of their best player. Even worse, two former Huskies let the Patriots score 31 unanswered points to win the Super Bowl Sunday.

The Beavers are bad at basketball at a historic level. It's tough to even talk about them in any positive way because they are so horrendous. I don't understand how it's possible, honestly.