ASU stays in the same spot, but some of that is due to Oregon State's poor performance

The final weekend of non-conference play is behind us. Now there is finally a chance to see how these teams respond when they play each other in the Pac-12.

There are still seven undefeated teams at this point, which shows the conference's strength against other quality out-of-conference foes. 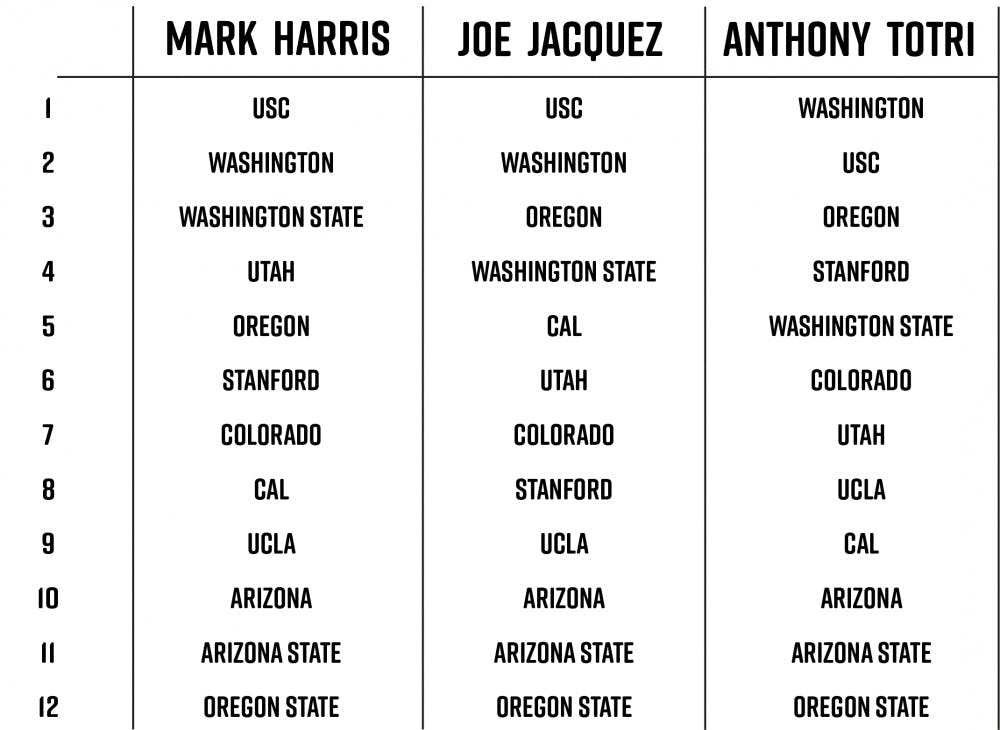 Here are the power rankings heading into week four:

USC stays at the top despite an uneven 27-24 win over Texas. The Trojans had difficulties all game moving the ball, but were saved by some late-game heroics from quarterback Sam Darnold. Even though Darnold is a special player, USC needs to move the ball more consistently or it could find itself lower on this list in the future.

Yet another taking care of business game, this time with Washington obliterating Fresno State 48-16. It is baffling why teams continue to punt to Husky receiver Dante Pettis, as he added another punt return to the record books on Saturday. Washington will face its first real test with a road trip to Colorado this weekend.

WSU gets a boost in the rankings by smashing Oregon State 52-23. There was never a doubt the Cougars would win, especially with quarterback Luke Falk tossing for 396 yards and six touchdowns.

There is nothing much to say here, as the Utes took care of business by stomping San Jose State 54-16. The Utes kick off Pac-12 play on Friday when they travel south to play Arizona.

It was not expected that Oregon would start out 3-0, but here we are. The Ducks smashed Wyoming 49-13 over the weekend, thanks to running back Royce Freeman who gashed Wyoming to the tune of 157 yards and three touchdowns.

San Diego State sure likes beating Pac-12 teams, with the Cardinal as its most recent victim. SDSU running back Rashaad Penny had another standout game, with 175 yards and a score. Quarterback Keller Chryst was bad for Stanford, completing nine of his 20 passes with two interceptions as well. Stanford is still better than its record, but a sub-.500 start is not good enough.

Much like Utah, the Buffaloes excelled against in-state "rival" Northern Colorado. The Buffaloes will show us who they are by how they play against Washington.

It turns out it's tough to win on the road when you allow the opposing quarterback to throw for six touchdowns and give up 48 points at the same time. That's what UCLA did in its 48-45 loss to Memphis. Bruins' quarterback Josh Rosen played well again, but his supporting cast limits the team's production.

There is a glimmer of hope for the bottom three teams. Arizona kicked the living daylights out of UTEP, in the form of a 63-16 road victory. Arizona dominated the game (and yes, UTEP is not good) and after going 3-9 last year, it should appreciate this win.

A close 52-45 road loss to Texas Tech does not move ASU up, but it does keep them idle. The defense was porous once again, but quarterback Manny Wilkins was excellent with three touchdowns and 326 yards. Wilkins has yet to throw an interception this season, so there is some hope for the Sun Devils. Receivers N'Keal Harry and Kyle Williams both topped 100 yards as well.

They need to open up more grief counseling centers in Corvallis, Oregon, because the Beavers are pathetic. In this week's installment of pain, OSU was slaughtered at WSU by the score of 52-23. And that very well could have been the Beavers' best game of the year.