Austin Lemieux learned from some hockey greats, including his father Mario Lemieux

Austin Lemieux has played hockey for as long as he can remember.

The redshirt freshman forward for the ASU men’s hockey team said his father introduced him to hockey at a young age. He learned how to skate when he was only a three year old in Sewickley, Pennsylvania.

“I've loved it ever since,” Lemieux said.

Whenever Lemieux, now 22 years old, skates onto the ice, he will usually be faced with the expectation to live up to the greatness of his father Mario Lemieux, a Hockey Hall of Fame inductee.

“It is kind of tough to live up to what he has done, so I just try to do the best I can and see where that takes me,” Austin Lemieux said.

Lemieux doesn’t seem to feel burdened by sporting a famous surname. He realizes the inevitable underlying pressure but tries not to think about it.

Mario Lemieux has supported his son with hockey since the start, teaching him an offensive prowess, fundamental skills and a competitive nature.

Lemieux said life growing up with his father was simple, and it has allowed him to feel more comfortable while improving within hockey.

“He is just like any other dad,” Lemieux said, "but the things that helps me throughout hockey is that I have him to fall back on. He is one of the greatest players to ever play the game, if not the best.” 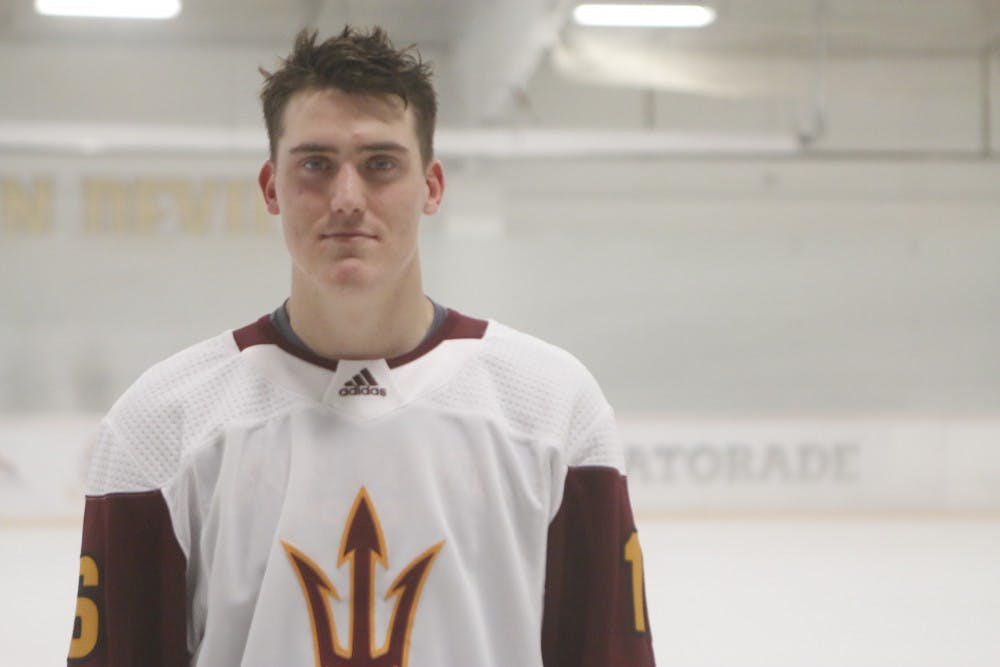 Mario Lemieux played a 17-year career in the NHL with the Pittsburgh Penguins that concluded in 2006, yet he has owned the franchise since 1999.

With his accomplishments, the Penguin legend earned his enshrinement into the Hockey Hall of Fame in 1997 and has been widely acknowledged as arguably the greatest hockey player in history.

Although he was just a kid at the time, Lemieux said he stills recalls certain memories and moments from when his father played.

As he sat inside old Civic Arena in Pittsburgh, Lemieux said he will always remember when he witnessed his father’s jersey come down from the rafters following his comeback from his first retirement.

He also remembers going to every home game, and he vividly remembers sitting next to his father between many periods.

Through his journey, Lemieux eventually found his way to Tempe – over 2,000 miles away from his family and hometown.

After he finished junior hockey, Lemieux had no idea where he was going to play in college. When an up-and-coming Sun Devil program made an offer, he jumped at the opportunity.

ASU wasn’t his only option, but it was his best option, and it wasn’t a difficult decision for the upcoming prospect.

For Lemieux, transitioning into collegiate hockey wasn’t as easy. When he redshirted his first season with ASU, he struggled with some concepts on the ice, including the pace of play.

After almost every game, he would ask his father for thoughts and advice. In addition to his father, he has also learned from another Pittsburgh Penguin icon.

Sidney Crosby, a hockey great and a potential Hall of Famer himself, lived in the Lemieux household for a while when he started playing in the NHL, becoming another mentor to a young Lemieux. He used to watch what Crosby did on and off the ice, and he still sometimes goes to Penguins' practices when he is at home.

“Just learning from him and watching what he does is probably the best thing that could have happened to me other than having my dad to look up to,” Lemieux said.

Brinson Pasichnuk, a captain and junior defenseman, said watching Lemieux progress as a hockey player has been interesting. Pasichnuk notes that Lemieux has always had an offensive game, but he has now developed an all-around skill set, including an improved defensive mindset.

“Just watch out because I think he is going to be special,” Pasichnuk said.

Pasichnuk was right, as Lemieux scored the ensuing weekend against Alabama-Huntsville, which was his first collegiate goal. He has tallied two goals and two assists so far this season. This weekend, ASU (6-2) travels back to the Lemieux's home state to play a series against No. 6 Penn State.

Although ASU coach Greg Powers will be patient with him, he understands the potential his young forward possesses and his mind for the game.

“That is a lost art,” Powers said. “I think in today’s game, you see all of these kids that can go a million miles-per-hour and they get nothing done. Well, Austin (Lemieux), he can skate, and he can think, so we think before it is all set and done he is going to be a special player for us.”