Anyone who drives in Tempe during peak rush hours is all too familiar with the negative emotions stemming from bumper-to-bumper traffic.

At first, it's the feeling of distress about the seemingly endless row of cars in your sight. After a few deep breaths, just as the anxious thoughts appear to dissipate, an equally distressed driver unceremoniously cuts into your lane.

In a flood of adrenaline, you lay on the horn and spitfire a string of expletives (or, if you're like me, internalize your anger), further exacerbating your aggression.

With no end in sight, you eventually come to the unfortunate realization that you will be late to your 9 a.m. class.

With a reported 74% of the 51,585 enrolled students on the Tempe campus in 2018 living off campus, enduring traffic is one of the expected trade-offs that come with attending the No. 1 school in innovation.

Recent construction projects throughout Tempe surrounding campus have caused traffic jams and accidents that have crossed the line from justified to unreasonable.

The Sixth Street closure — as part of the development of Novus Innovation Corridor — is expected to last until the end of the semester and has been a major impediment to the normal flow of traffic since the beginning of the semester.

The closing of Sixth Street, the main point of entry for Lot 58, Lot 59 and the Packard Drive South Structure, as well as a convenient access road for many other parking lots on the northside of campus, has created an influx of traffic to Rio Salado Parkway, one of Tempe's most essential streets.

Resulting from this is a half-mile stretch of standstill traffic on Rural Road from the Loop 202 until Rio Salado Parkway, where one can expect to sit in dread for no less than 20 minutes in the peak morning rush hours.

Although it is important for ASU to maintain its commitment to innovation, Tempe must place the priorities of its residents and commuters first and foremost by ensuring that its roads and means of transportation are able to accommodate these extra developments.

If traffic has always been a grievance for Tempe residents and commuters, it is frightening to imagine how much worse it can get with the influx of people and businesses.

David King, assistant professor at the School of Geographical Sciences & Urban Planning, said that while we may reroute traffic, the most viable solution to decrease traffic is the solution we don't pursue because it would diminish our goals -- to stop construction.

Unfortunately, construction is necessary for progressing the needs and wants of an ever-growing, bustling city such as Tempe. Its implementation is fundamentally flawed.

"Every downtown area in every single fast-growing city is struggling with this, and there is certainly not a lot of planning or transportation engineering that has been really focused on this issue of traffic management in the context of construction," King said.

What are the consequences of this construction-induced traffic (in the name of innovation) on our mental and physical health?

According to Time, there are many negative effects of long commutes and constant exposure to traffic. Notably, the risk of depression rises, anxiety increases, happiness and life satisfaction declines and blood sugar and blood pressure rise. 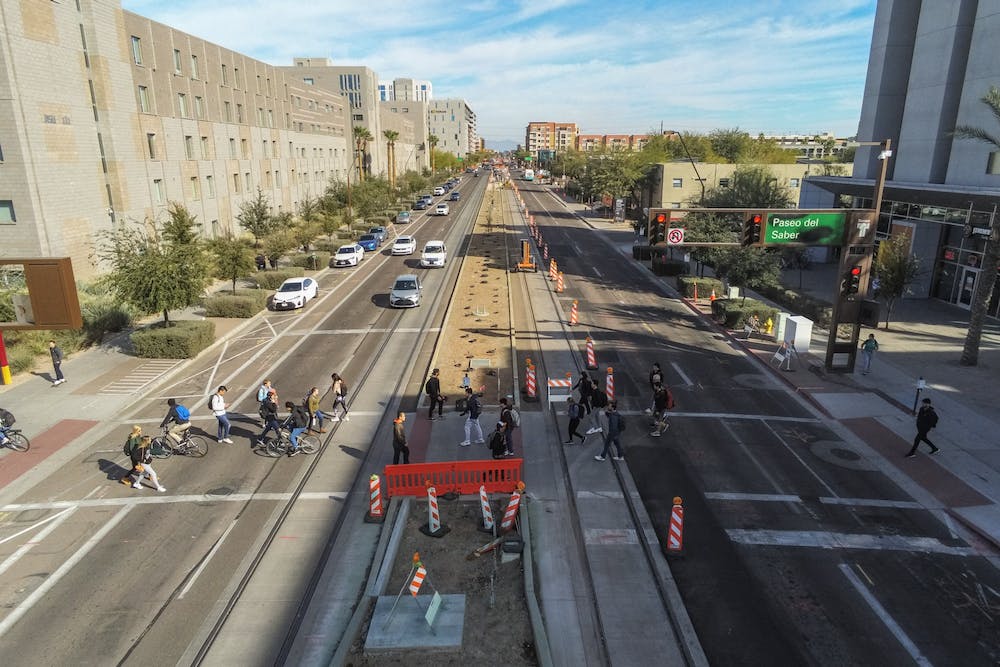 Isabel Han
An aerial view of ASU students walking and driving through a construction zone on Thursday, Feb. 6, 2020, on Apache Boulevard in Tempe.

Not only are the damning effects of traffic exhibited throughout scientific literature,  but ASU students also bear witness to the toll that their commute to campus takes on their mental health.

Nicole Mulvey, a sophomore studying mathematics, commutes from Gilbert to Tempe every day. While it typically takes her 30 minutes to get to school under normal conditions, traffic doubles her traveling time to a full hour.

"Construction has made my commute more hazardous and time-consuming," she said.

When roads are restricted due to construction, people are forced to seek alternative routes. Mulvey recalled multiple instances when Tempe traffic induced an overabundance of stress in her.

"This causes stress to the driver and the pedestrian because it makes walking or driving more dangerous," Mulvey said.

"The way construction is done is a mess and it definitely disrupts traffic flow and makes it less safe to ride bikes and walk and do these other things that we would like to encourage people to do," King said. "The price of crossing a street should not be death."

A new residential development, Culdesac Tempe, the first car-less apartments built in the U.S., is discouraging the use of cars by not providing parking to their 1,000 residents.

Although carless developments such as these appear to be aiding in alleviating vehicular traffic by promoting eco-friendly living, they boost pedestrian traffic, inadvertently resulting in greater vehicular congestion.

The increased vehicular traffic then makes it even more dangerous for pedestrians and bikers, creating a feedback loop.

According to CNN, "computer modeling shows that if one car is not keeping up with the flow of traffic, the number of vehicles per lane, per hour, declines as more drivers are distracted."

"The construction vehicles wreck the streets because the axel weight is too heavy for the street load, so then the streets themselves become worse off," King said.

When the public safety and life satisfaction of the University's community is compromised, appropriate recourse is necessary starting with advancements in construction practices.

In order to make traffic around ASU as painless as possible, Tempe should better attempt to focus on certain areas on campus at a time instead of making the entire campus a construction zone.

This will minimize overall congestion and increase the quality of drivers’, pedestrians’ and bicyclists’ transportation experience.

While there's yet to be a perfect solution, reducing the headache and anxiety that comes with a commute filled with construction cones and collisions could drastically improve the campus experience for both commuters and those living on campus.

King said that traffic will improve substantially once construction ends, however, it is not clear when that may be considering the rapid growth of the city.

"The best we can do is make it as painless as possible."