ASU's Downtown Phoenix campus did not have its own polling location on Election Day like ASU's other campuses, but students in the downtown area still made sure to get involved in the general election.

Students living in downtown Phoenix were encouraged to vote at the Burton Barr Central Library less than a mile from the Taylor Place residence hall. There, Phoenix Mayor Kate Gallego handed out doughnuts to voters who showed up early.

Gallego was running for her second term as mayor against Tim Seay and Merissa Hamilton. The race has since been called in her favor.

While speaking with voters, Gallego emphasized the city's wish to break the record turn out among young voters, especially since past elections have impacted the Downtown Phoenix campus itself, including the decision to relocate the Thunderbird School of Global Management.

"All of those partnerships are because of how people voted in local elections," Gallego said. "The fact that we have a great, exciting, vibrant downtown is because leadership from the city of Phoenix is in partnership with ASU." 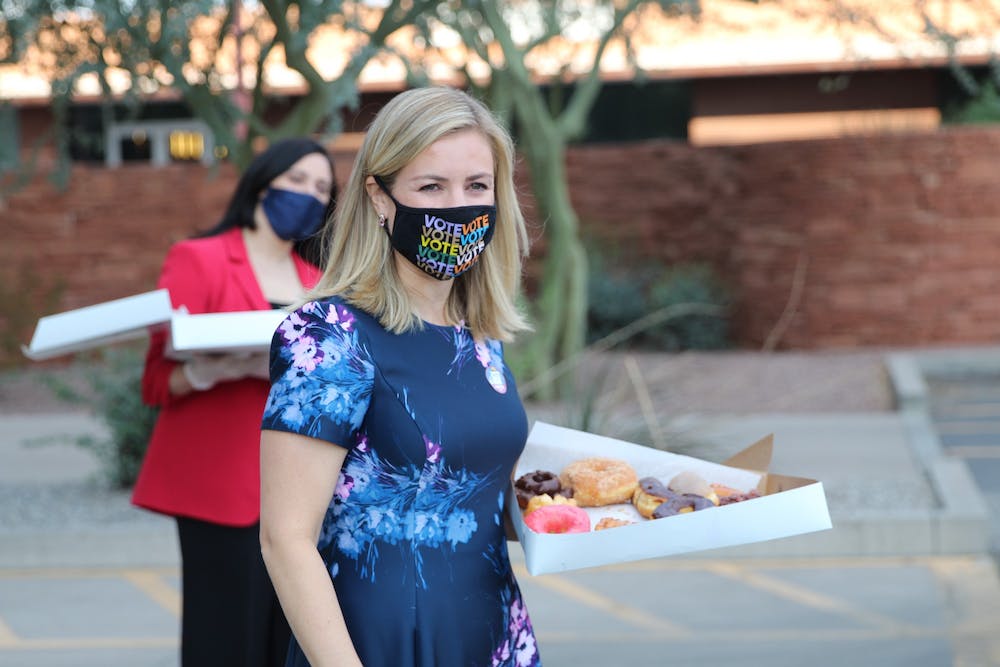 Students also lined up at the Phoenix Convention Center, around a six minute walk from campus.

Monaliza Hernandez, a freshman nursing major, said she voted at the convention center in person after she changed her address and discovered her mail-in ballot was not counted.

Despite the mishap with her mail-in ballot, Hernandez said she enjoyed the polling location's atmosphere.

"It was very nice," Hernandez said about voting at the Convention Center. "They have social distancing rules in place, there were not too many people."

And undeterred by the lack of a polling place, Undergraduate Student Government Downtown set up a ballot drop-off box for the first time on campus.

According to Vice President of Policy Renuka Vemuri, USGD had been advocating for a drop-off box for the campus since August and managed to secure the box in the Student Center at the Post Office just before Election Day.

Vemuri, a junior medical studies major, said poll workers stationed at the drop-off box estimated around 100 students came to drop off their ballots.

Emily Sargent, a freshman studying nursing, was one of the students who took advantage of the drop-off box on the Downtown Phoenix campus to ensure her vote was counted.

Sargent was a first-time voter and said she felt it was her duty as a citizen to vote.

"I'm passionate about my values," Sargent said. "I want to see those reflected in the people I elect into office."

Since the ballot box was confirmed on such short notice, and combined with the pandemic resulting in fewer students living on campus, Vemuri said USGD wasn't sure what kind of turnout to expect.

"We're just happy that we even had the amount of students that did come," Vemuri said.

According to Vemuri, USGD is looking to provide a drop-off box on campus in future elections.

As Election Day turned into election night, there was a bit of excitement and anxiety buzzing throughout Taylor Place. Students gathered around the three televisions in the dining hall to watch election results roll in. 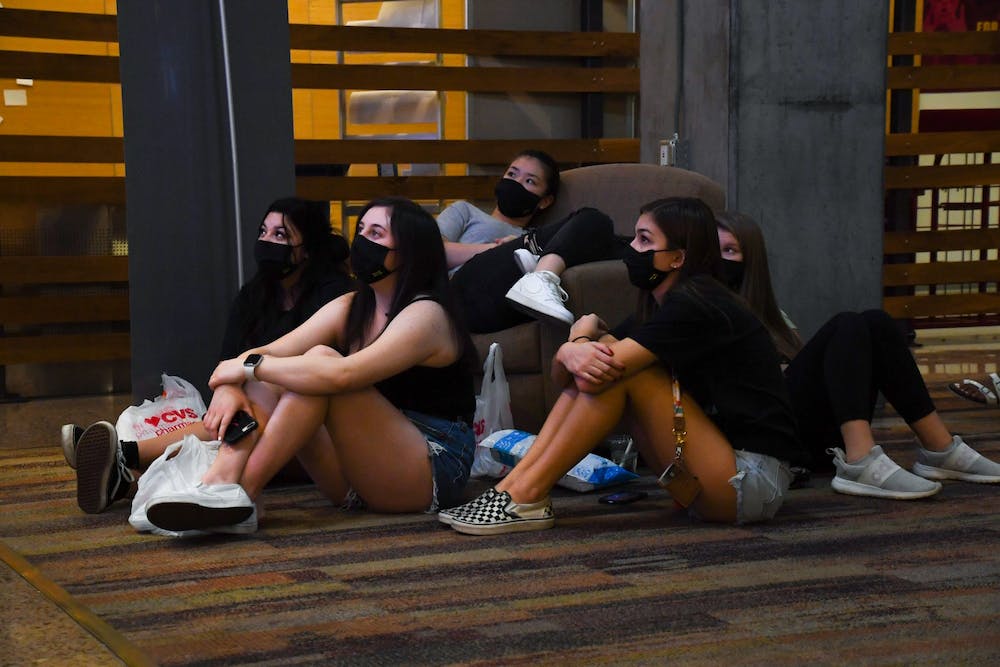 Hernandez said she fears unrest after results come in this year, especially being on the Downtown Phoenix campus.

"A lot of people have been telling me if you're going to go out tonight, have someone with you, just in case a riot happens," Hernandez said.

Kaya Thompson, a freshman medical studies major, said she shared that fear, and she was stressed for the way people may react to the election results.

"Either way, people are going to have a problem with it," Thompson said. "Our country isn't a place where one party wins and the other side is going to be OK with it."

However Danielle Du, a junior studying medical studies, said the post-election anxiety was nothing new.

"I do remember very clearly the 2016 election, and it felt like the sky was going to fall," Du said.

Toward the end of the night, pockets of students with blankets hunkered down in some of the lounges, preparing a long night as results were expected to slowly trickle in.

Thompson had moved from one lounge to her room, ice cream in hand as she watched results continue to come in.

"I think that every vote that was casted should be counted," Thompson said about the expected delay in final results. "It was a vote — somebody filled out that ballot, someone took the time out of their day to mail it."

Photographer Angelina Steel contributed to the reporting of this article.