Why does Velveeta's Twitter account love the former ASU men's basketball guard so much? Well, 'BC HE'S THE BEST'

You may think you are Luguentz Dort's biggest fan in the world. But the fandom from Velveeta's Twitter account may beg to differ.

The official brand account for the cheap, easily meltable "cheese" has long expressed fervent support of the former ASU men's basketball guard and his team, the Oklahoma City Thunder.

Velveeta's fandom started, based on Twitter's Advanced Search tool, last April when the COVID-19 pandemic began. A Thunder fan expressed support for Velveeta on Twitter and asked for some Velveeta dip while she was on lockdown.

Velveeta took the chance to turn that response around with a witty simile: "Lockdown like Luguentz on D."

Since then, Velveeta has shown relentless support of Dort, spanning over 90 tweets as of Friday in conversations relevant to basketball or not, letting everyone know that he was the best. The account even expressed support for the Sun Devils at a point.

Velveeta also spurred support for an All-Star nomination for Dort, garnering over 2,000 likes and 500 retweets for the guard who was averaging 12.8 points per game at the time.

Dort received only 20,355 fan votes and was subsequently left off of the NBA's Western Conference All-Star starting lineup, along with not being chosen by coaches as a reserve. Velveeta responded, displeased, asking "WHERES DORT THOUGH?"

With no obvious connection between Velveeta and Dort, I direct messaged @EatLiquidGold to simply ask: why?

To the surprise of me and a few coworkers, the account responded, doubling down on its stance: "BC HE'S THE BEST JEFFREY." 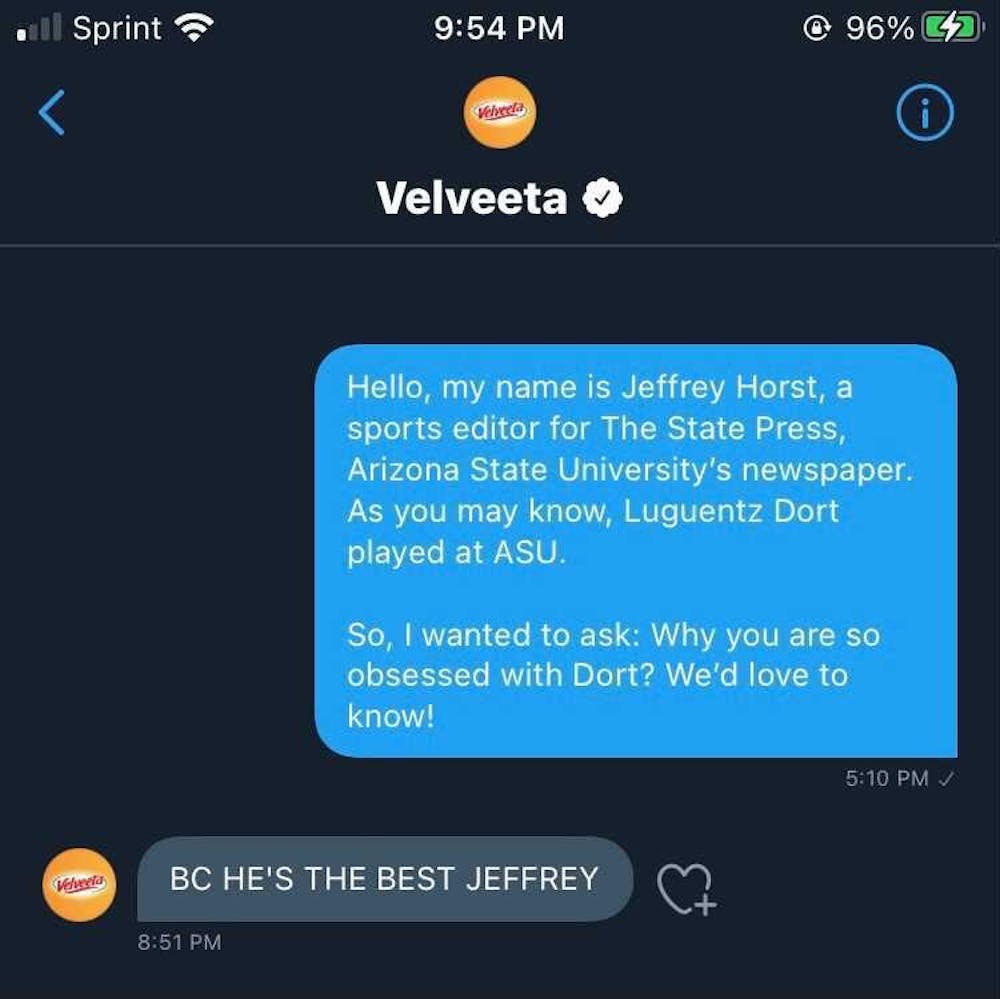 According to Ryan Mannelly, associate director of marketing at The Kraft Heinz Company, the account is run by its agency partner, VMLY&R, with direction from the company.

A spokesperson from VMLY&R did not respond to questions regarding if there is a particular person who runs the account and which company holds creative control over the content the account posts.

"Our fandom of Dort has continued to grow since his rookie year as we admire how he always gives 110%," Mannelly said in a statement. "We’ve loved engaging with other Dort enthusiasts on Twitter who are equally passionate about his talents, and root for his success."

When asked about the account Thursday in a postgame interview, Dort said he noticed it a few weeks ago and decided "Let me retweet them." He also saved a fan-made Velveeta-inspired wallpaper of him.

"I love it ... they love me, you know," Dort said. "All the tweets that they (post), they're really funny. It's good to see that people really like it."

After averaging just above 16 points per game in his lone season at ASU, Dort quickly went from playing on the Thunder's G League affiliate, the Oklahoma City Blue, to starting games for the NBA team.

Dort broke out during the Thunder's time in the 2020 NBA Playoffs, including scoring 30 points against the Houston Rockets in its final game of the postseason. He is currently averaging 12.3 points per game in 35 starts this season.

No matter how cheesy Velveeta's love for Dort is, he still "Appreciate(s) the love!"