They once scanned the crowds, making quick and subtle eye contact with dozens of slightly strung-out faces.

Now, they alternate between the dark black pupils of the smiley face beach ball to their right and the eye of  Saints flickering in the prayer candle wicks on a shelf above the turntables.

But the DJs, curators and music fanatics running Recordbar Radio believe this is the best possible alternative.

At least for now.

The project was originally intended to be a hybrid venue, coffee shop and record store, but the pandemic changed its path. Now the organization's Youtube livestreams bump every subgenera from deep house to drum and bass and feature DJs digging through crates, spinning records and mixing on laptops.

Recordbar Radio engineered a digital microcosm for Arizona’s seldom understood underground electronic music community, even as a pandemic picked away at the scene’s very foundation.

Nearly a year since its inception, members of the organization take a minute to reflect on where they’ve been and where they’re going.

What led you to the Phoenix music scene? Tell me a little bit about how Recordbar got its start.

I’m almost 40, and I started DJing when I was 15. So, over a decade of promoting parties, doing the whole DIY underground thing. And this was kind of going to be the final peak of all of those years doing that — opening up a place for DJs, producers, musicians, artists, bands to not only gather and share ideas but also to perform and hang out and create.

There's a place in Chicago that I really fell in love with called the Co-Prosperity Sphere, in Bridgeport on the south side… it was just a really, really awesome community space that I thought Phoenix could truly benefit from.

I spent 13 years here and worked really, really, really hard developing a scene and showcasing the talent that hadn't really had an opportunity prior… Anyway, I just learned so much about how people work together (in Chicago) and that really wasn't happening here. So, I'm gonna come back and see if I can give this a shot and see if there's a way to bring all of these various disparate, disconnected pieces together.

Then the pandemic hit. And so we were like, ‘Why don't we just create the platform that allows people to come and perform, and at least still share their ideas, but we'll just do it as a YouTube livestream?’ Because we didn't have the money or the infrastructure to actually create a true DIY radio station or an independent internet radio station… We were like, ‘You know what, screw it. Let's just throw this up on YouTube.’ Yeah, that's what we did. And here we are.

It's primordial. I know a lot of people say that. Arizona music and Arizona culture have been here forever. And if you look back, that's true, right? But that culture is really… just a Southwest version of Americana, right? We're talking about Southern-fried rock, we're talking about western country and blues, we're talking about metal, and punk and noise. And that's great. Those are all fine scenes. But where music at large is moving is like a whole bunch of different styles of music, representing a whole bunch of tastes, age groups, scenes, communities. And Phoenix just hasn't really done a great job of keeping up with all that.

There's also just a lack of resources here. And so there's a lot of just tension when people aren't able to share or feel like they can't share. So you'll have someone who owns a club. And not only do they own the club, but they also make money as the DJ. And so they don't give anyone any gigs. Or the other person owns a venue. And all they care about is making money. So they don't book any talent that is actually creative, experimental, unique, new underground, unheard of, or local. They are only bought by talent that sells tickets. The problems are fundamental and deep here. And it's because things are just truly not run by artists, DJs creatives or collectives that really care about unearthing, showcasing and bridging the gap between talent and scenes.

Well, records had been a lifelong hobby. I've always been purchasing records since I was short pants as Paulie Walnuts would say, haha Sopranos. I managed to hold on to most of the records. And DJing, certainly bands, small-time gigs, here and there through high school and whatnot. And again, just amassing a huge record collection. And throughout the 90s not so much, 2000s not so much. I switched over to CDs for a while.

But I realized that in certain places people are still playing records as opposed to doing the laptop thing, and it kind of really just sparked something inside me.

Jake offered me a position as one of the partners and I jumped on it real quick. It's something I really believe in. And I really like it. It's the start of something. And I'm really impressed with everybody involved. The DJs and people behind the scenes as well. So, so far so good. I'm quite impressed.

I'm really impressed with all the musicians that are popping up. The beatmakers, the different musicians, it's just unbelievable. And I learned through Recordbar, they're starting to have talent come through, a couple DJs that are doing their own cuts. People coming out with VPS and, and whatnot. So, I'm just like, Wow, that's great. They're putting their own music out.

I myself was in a group. I did an album too. It's called Phase. This is from the late 80s. And it's me. That's right.

French whipped out Phase’s album with his smiling face on the record sleeve.

But Phoenix baby. Anyway, seriously? Yeah, I'm impressed with all of the decisions. Yeah, that's it for Phase. Look at that! Look at that sexy kid. 17 years old, man. 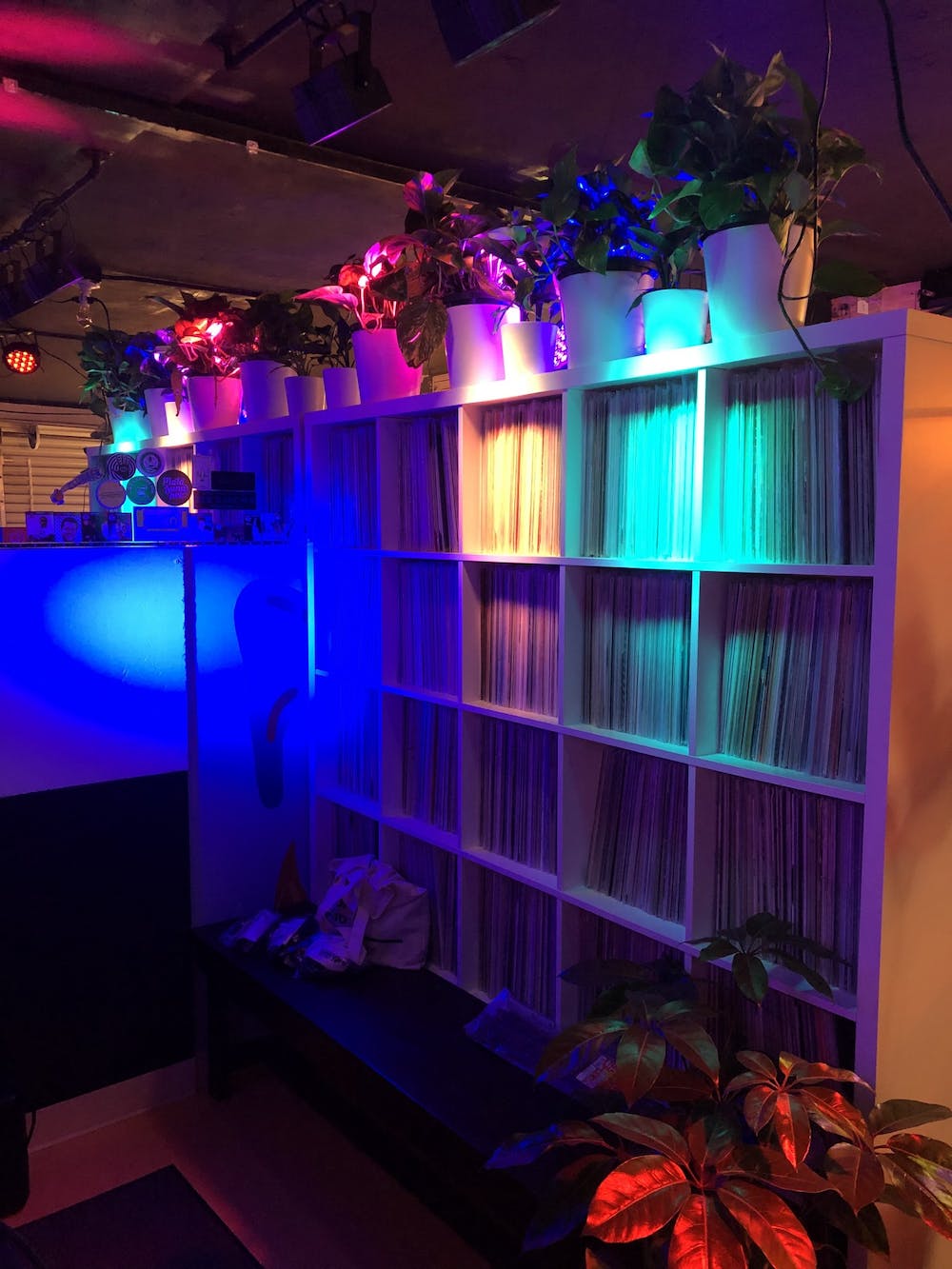 Shelves of records at Recordbar Radio & Shop in Phoenix. Originally the location was meant to serve coffee and sell vinyl records before turning to live-streaming.

I got involved in the Phoenix music scene just from going to tons of events from when I lived in Tempe in 2005. And I just migrated my way to downtown Phoenix… And I started DJing at Valley bar. They used to have these indie music nights subterranean, that I would partner up with my current partner (and perform).

And much like everyone else, I've been collecting records since 2007, and just have a massive collection. And getting involved in Recordbar radio. I think I got a text from Jake one afternoon…  he had just asked me if I wanted to work in a record shop.

And I was like, yeah, ever since I watched High Fidelity.

Obviously, nothing is happening. And for good reason. I hope that nothing happens for a while until everything is much safer to get back out there and attend live events again.

But we have a lot of these beatmakers that are popping up in the city. It's been really amazing to see the evolution of that and the Phoenix music scene, in general… it's really like a blank canvas. Like no matter what venue you come to Downtown, you're going to be in the right place. If you're an artist, if you're a musician, if you're a DJ, you're gonna be plugged into the right people to get you to where you need to go.

I got into Phoenix's music scene DJing house parties when I was a freshman and sophomore at ASU. Just like f***ing around with Virtual DJ, a free DJ software on my laptop. And it just sort of snowballed into me spending a lot of money on records and really liking to party.

I've been DJing for about 10 years now. And I got involved with Recordbar radio when they first started. They approached me about doing some regular programming on the show. And after doing that for a little while, I was really impressed with the mission and the stuff that everyone was trying to do with Recordbar radio. I started off making a donation. And then they approached me about becoming one of the investing partners. And I was more than happy to jump on board. I really love what everyone here is trying to do.

The Phoenix music scene has been a really solid place to grow up in at least from my experience. It's been a wild ride of seeing warehouse parties come and go, seeing groups of promoters do a bunch of collaborations. There's always going to be some mega for-profit promoters in every major city. But Phoenix has such a great depth of coverage for genres and types of events with like small promoters that there's always something fun going on when we're allowed to throw parties.

The gay and queer scene has been really cool for like stuff that pops up at bars, warehouse parties. There's even been a house party circuit…  where people were throwing, like pop-up drag shows at houses. And those parties were really awesome…. In the last 10 years, Phoenix's music scene has been really diverse with a bunch of options for types of shows to see, genres that you can go out and hear.

I was going through a lot of shows when I was young, like in high school, I would go to a lot of punk and hardcore show with friends and I started buying records, and through that, I started digging for records in the local bookstore circuit that was happening at the time… Basically, a few years later after collecting some records, I was approached by someone named D gentrification, his name is Alex but he goes by D gentrification, and he asked me if I wanted to maybe try DJing. So he really encouraged me.

I got an email from Jake about doing a radio show around the time of the pandemic. I was really kind of depressed about not being able to do shows anymore because I had been throwing my own warehouse raves and shows for a few years. And he emailed me about Recordbar. I was super excited about it. … I'm super happy to have the platform. It's a great thing for Phoenix and it helps keep that cycle of continuing to encourage people to get into the music scene.

I'm born and raised here in Phoenix. And it's not an easy place to grow up, let's be real. Phoenix specifically, I'm not talking about Ahwatukee or Scottsdale here. I'm talking about Phoenix and Glendale and South Phoenix. These are hard places to grow up. This is not an easy environment by any means. So I think the greatest gift that I can give is that relief that I was given when I discovered the music scene here. I saw that there is refuge in the desert, there is beauty and art and music that is so amazing that comes out of this land. And, for the people here, having that refuge and finding that at a young age was really important to me, so I've been doing all I can to pass it on. Not just move to LA.