In front of the ICE Phoenix Field Office in downtown Phoenix, demonstrators called for change

In front of the U.S. Immigration and Customs Enforcement Phoenix Field Office right off of Central Avenue in downtown Phoenix, over 40 demonstrators gathered in the 90-degree heat to rally for immigrants rights on Sunday.

Signs ranging from "Migration is a human right," to “ICE is still separating families," filled the sidewalk, while cars honked in support as stories told about immigration hardships were told.

The rally was organized by Arizona Jews for Justice, which looks to mobilize the Jewish community toward progressive action in the Valley and Arizona as a whole.

Members and organizers from Poder Latinx and Arizona Dream Act Coalition also spoke at the rally.

Eddie Chavez Calderon, a DACA recipient and the campaign director for Arizona Jews For Justice, was in a detention center as a child and said "nothing has changed since I was four years old."

"We are here to support our undocumented communities," Chavez said. "We are here to make sure that folks understand that we are tired of the same narrative that pushes migration as some sort of illegal, horrific thing.

"We want to change the narrative of migration being a crisis. The crisis isn’t in migration, our response is a crisis of how we dehumanize people, how we look at people as less than." 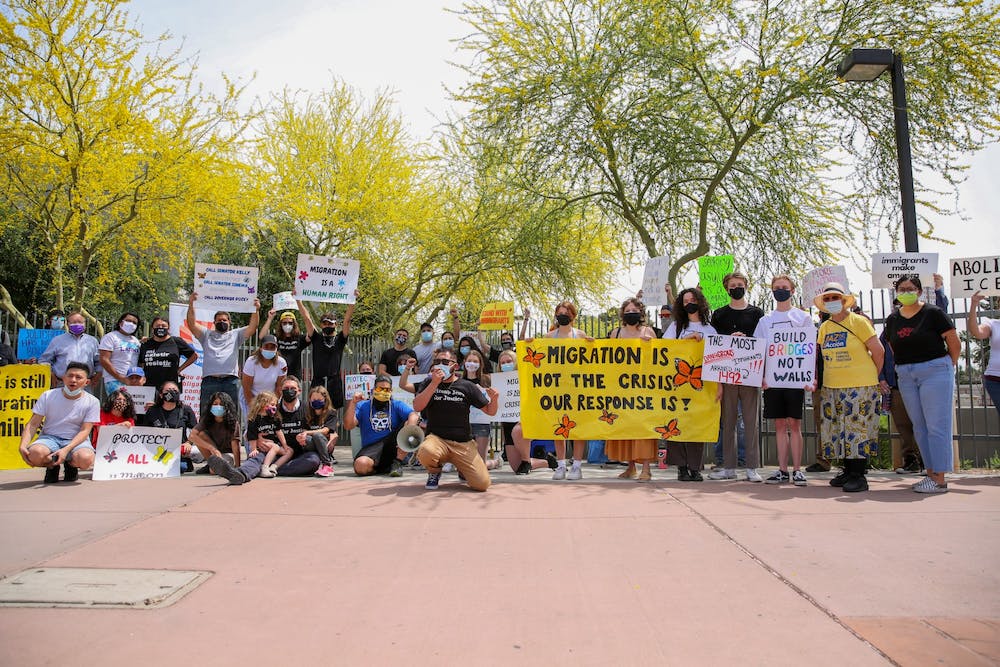 Members of Arizona Jews for Justice protest outside of the U.S. ICE Phoenix Field Office on April 11, 2021.

“Everyone is valuable, everyone is necessary,” said Davis, also a community outreach organizer for Arizona Jews for Justice. “These people are human.”

The issue of allyship was also discussed, emphasizing how people need to care about issues that may not directly affect them.

“We are all here in solidarity with asylum seekers,” Davis said. “I have lived a very privileged life, I get to go home at night and see my family. And a lot of people at the border, a lot of asylum seekers don’t have that privilege.”

Salma Ortiz Diaz, an organizer with Arizona Jews for Justice, also spoke at the rally, explaining how those migrating are just trying to make a better life to them and their families.

“I think it’s very important to remind ourselves that they’re here just to do the same things that we are here to do,” Diaz said. “Provide a better life for ourselves and for our families.” 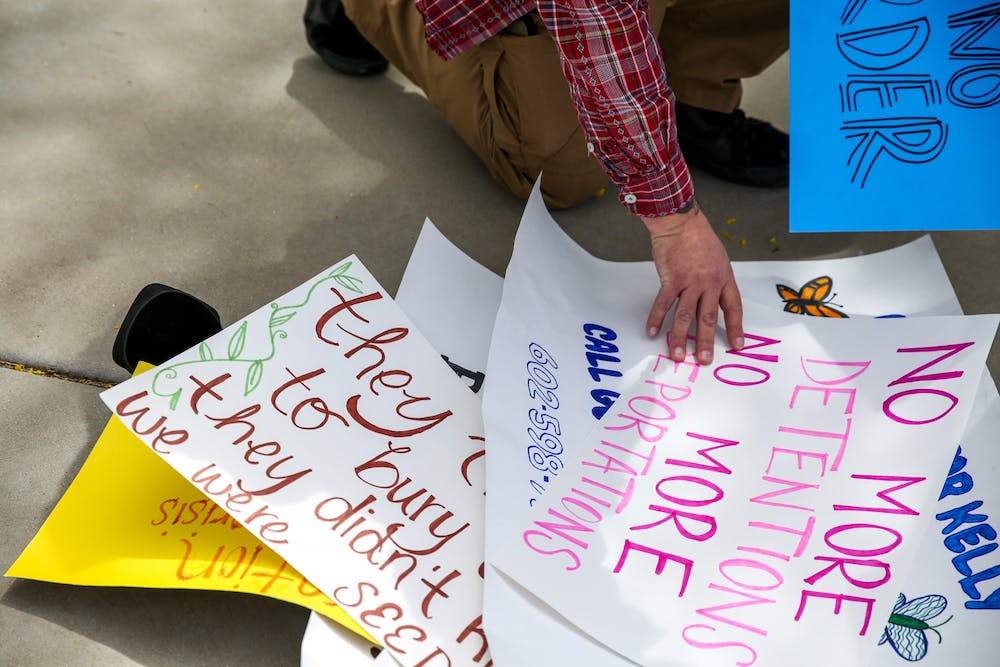 A participant of the Arizona Jews for Justice protest outside of the U.S. ICE Phoenix Field Office grabs a sign that reads "no more detentions, no more deportations."

Participants were also left with a call to action.

“We need to hold our Senators that we voted in, that we canvassed for — we need to hold them accountable,” Diaz said. “We need to make sure that they’re doing their job, because we voted them in, so we could easily vote them out.”

Specifically, the organizers told demonstrators to call Sen. Kyrsten Sinema and Sen. Mark Kelly and push them to vote for the American Dream and Promise Act of 2021. The act would provide certain undocumented individuals with a path to receive permanent resident status while containing other immigration-related provisions.

The Act was passed by the House on March 18 and now moves to the Senate.

Demonstrators were also told to call Gov. Doug Ducey’s office to tell him he should not declare a state of emergency over immigration.

In the end, Arizona and the U.S. were built on the backs of immigrants, said Ellie Sims, an organizer with Arizona Jews for Justice.

“Since day one, since emancipation of Arizona as a state, we are a state of immigrants and we are going to continue to be that,” Sims said.