Shady Park, a key fixture of house music, food and drinks just off Mill Avenue in downtown Tempe, recently lifted its 14-month hiatus of no live music. Not long after the live music revival, it received noise complaints from its new neighbors.

In a letter to its patrons released on social media Wednesday, the venue claimed residents of a “new, luxury high rise building” south of Shady Park’s location near the corner of Mill Avenue and University Drive initiated an “aggressive campaign” asking the city of Tempe to step in and stop the live music at Shady Park.

Located across the street, just south of Shady Park, is Mirabella at ASU, a high-rise retirement complex that opened in December. The retirement community was launched to provide residents close access to University services and opportunities to stay engaged with the community. The 20-story complex is also located just steps away from Mill Avenue, a bustling street of bars teeming with drunken college students.

“Arizona State University is aware of the disruption that Mirabella residents are experiencing and the rights and responsibilities of the owners of the Shady Park night club and we are working with all parties and the city of Tempe to find a satisfactory resolution,” a University spokesperson said in an email.

Shady Park has responded to noise complaints by “implementing some sound mitigation measures to direct the noise away from the residential area,” according to a statement from the city of Tempe. Still, “there are no specific changes to the city noise ordinance or restrictive measures related to Shady Park or any other business in the Mill Avenue entertainment area being formally considered by the City Council at this time,” the statement said.

Shady Park was also given a code violation for selling tickets to shows in advance at the location. The venue’s permit, issued in 2015, states that the “business shall not operate as a concert venue with advance ticket sales.”

In response, Shady Park explained in the letter to supporters that it will be moving to a “cover charge only” model until another solution is found.

this is not only the best music venue in the state of arizona, it is a cultural hub for the music community. my fondest memories of Arizona involve shady park. PLEASE PLEASE PLEASE email councilcommunicator @ tempe (dot) gov and ask them to #SaveShadyPark !! https://t.co/CyjXqi0xZf

Following Shady Park’s letter to its patrons Wednesday, several supporters of the establishment took to social media, sharing a Change.org petition directed at the Tempe City Council to “#SaveShadyPark.”

Amanda Rodriguez, who started the petition that had over 5,000 signatures Thursday evening, said she noticed a difference a few weeks back when the stage was moved, presumably to redirect the sound away from Mirabella.

"It's unfortunate for those residents, and I do feel for them. It is loud, but it is what it is," Rodriguez said. "They should have done a little bit of research before they moved into that facility, or maybe the building people who put that building right there should have thought about that before they decided on that location."

Bailey Price, a senior studying sustainability, said it is interesting the University decided to build Mirabella within earshot of a nightlife hub.

The University seems to be using the land for “people that are most likely not students and then hold them as a priority, where it feels like the students and the small businesses and people that have been here in Tempe for a long time, should be the priority, or at least be taken into consideration,” Price said. 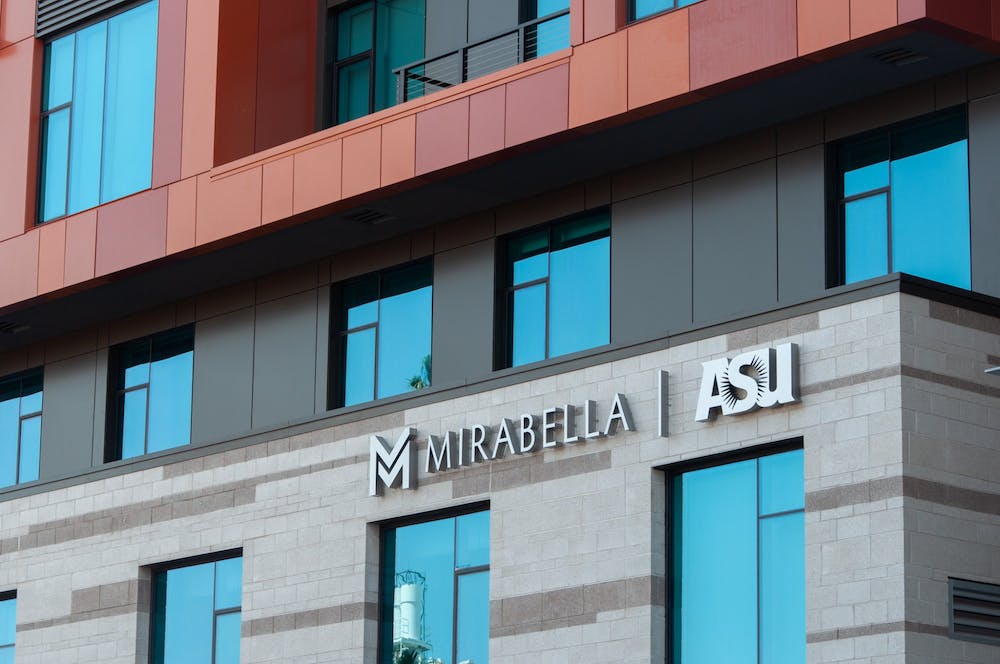 Residents living at Mirabella at ASU, pictured June 16, 2021, have filed noise complaints against Shady Park, the restaurant and live music venue located just across the street.

The social media outcry extended to Google reviews of the Mirabella community, with Shady Park supporters bombarding the complex with one-star reviews. The number of low reviews fluctuated after the #SaveShadyPark movement took off on social media, with new reviews coming in and old ones being removed.

Vania Ruiz, an ASU alumna who studied digital marketing, has been going to Shady Park for years. There was a time, Ruiz said, when she went once a week.

“Like everyone else, I really want things to go back to normal. But if the stage is flipped, if they have to do some changes to it, it'll still be Shady Park, and I know my friends and I will still be there to support,” Ruiz said.

Ruiz and Liz Small, a senior studying music and marketing, both said that even for out-of-state artists, Shady Park is a great place to play.

“You know, house music is, like, super sacred in Arizona,” Small said. Shady Park is one of the only establishments in Arizona that plays house music, she said.

Small, who is also a music producer, said she noticed the music volume at the venue was getting quieter about a month ago. She also said Shady Park has been closing a little bit before 2 a.m. each night she has visited.

“I just hope that people realize that it's more than just a bar,” Small said. “It's a hub of music, culture and a place for people to come and enjoy house music and techno in a time when they're not really that many places where you can.”