Five of ASU's most unique clubs

Some may join Greek life during their time at ASU, while others may join Devils Quidditch

As the fall semester gets into full swing, students may be looking to meet like-minded people and get involved after few in-person events for so long thanks to the COVID-19 pandemic.

Some may join Greek life, a culture club or their silly little student newspaper. But with over 1,000 student organizations, ASU has a club for everyone, like those who race dragon boats or compete in quidditch.

So in no particular order, here are some of ASU's most niche pastimes.

This club practices the fast-paced ancient Chinese sport of dragon boat racing. Dragon boats are ornate 22-person boats with shorter oars, similar to a Viking-style boat, and it is painted in order to look like a dragon. A dragon-boating team generally has a drummer, a steerer and 20 paddlers who row to the beat of the drum.

The club is highly competitive, according to chemical engineering senior Matt Maurer, president and captain of the Dragon Boat Club.

The club is currently preparing for the Dragon Boat Festival in Tempe in March 2022, where there will be dragon boat races, food stalls and other entertainment.

The club was originally founded in 2009 as a recreational club but has since gone on to compete in local competitions.

The club has two practices a week at the marina on Tempe Town Lake, at 6 p.m. on Mondays and 7:30 a.m. on Saturdays.

The Dragon Boat Club can be found on SunDevilSync and Instagram.

Sydney Conner, co-president and co-founder of the club and a junior studying photography, business law and entrepreneurship, started the Typewriter Club after collecting 85 typewriters with her fiance, both inspired by the viewing of the 2016 documentary "California Typewriter."

The club lends typewriters to students for a fee of $8, the price of an ink ribbon roll. Since typewriters aren't a common item, the club is primarily a lending service. This way, the members can share their passion for typewriters with a larger community.

On occasion, the club will meet at coffee shops to collectively use the typewriters.

"It's basically a space to do whatever you want," Conner said, explaining that one does not need to be a creative person to use the machines. "Typewriters don't judge."

The lending service has already begun for the Typewriter Club, although no official meetings have been scheduled yet.

The club can be contacted through its email list as well as through SunDevilSync.

A Buncha Book Artists, or the "ABBA collective" as it is abbreviated on social media, is "a club focused on the appreciation and making of artists' books" said Daniella Napolitano, co-president and a graduate student in the School of Art.

Artists' books are books that are reshaped into pieces of art, rather than literature, Napolitano said.

As such, the club focuses on different techniques of paper-based art, including bookbinding, printmaking and water-marbling — a technique where pieces of paper are dipped into a colorful solution to create marbled designs.

The meeting schedule has yet to be determined, but information can be found on SunDevilSync, Facebook and on Instagram. 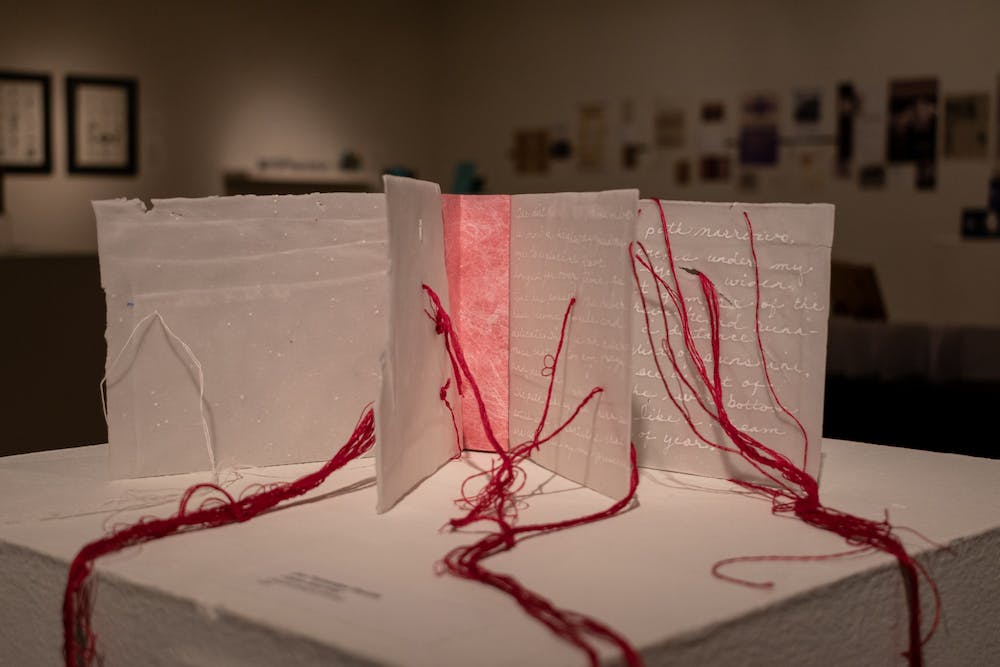 An art book titled "I have returned" by Jan Talmadge Davids is pictured on Monday, Feb. 1, 2021, at the Harry Wood Gallery on the Tempe campus.

Agility Dogs at ASU is an organization for dog owners to build relationships with their pets by competing in various agility-centered obstacle courses.

Rebecca Jernigan, the founder and president of Agility Dogs and a graduate student studying biochemistry, said she is interested in the social aspect of being around dogs, as well as learning more about the educational side of dog ownership and training.

On occasion, the club will host team-building movie nights, or even have different sessions to learn about the science behind dog training.

The organization is part of the Intercollegiate Dog Agility Association, which hosts national competitions for members and their pets.

Students can still get involved even if they don't have a dog. Members can volunteer at events and practices, and on occasion, there are loaner dogs available to train with, Jernigan said.

The details of the following meetings have not been finalized yet, but the club typically meets two times a month.

More information can be found on the club's SunDevilSync page as well as its Facebook.

The mythical game from the "Harry Potter" series is adapted for non-magic folk as Devils Quidditch brings the broomstick-based activity to ASU.

Romy Stewart, the treasurer for Devils Quidditch and a senior studying anthropology, explains that the rules are very similar to the Wizarding World version and that they are written with gender-inclusive terminology.

"The game has been adapted for worlds without magic, so instead of flying on brooms, we run around on brooms," Stewart said.

The club meets three days a week on the west fields at the Sun Devil Fitness Complex on the Tempe campus. On Mondays and Wednesdays, the club practices from 8:30 p.m. to 11 p.m. and on Sundays from 4 p.m. to 5:30 p.m.