In the most recent event in the series, ASU 365 Community Union showed 'Minari' and hosted Hawker Street Market vendors at Sun Devil Stadium

After over a year off because of COVID-19, ASU 365 Community Union is back to hosting in-person events, including “Movies on the Field,” a monthly series where the ASU community is invited to watch movies at Sun Devil Stadium.

The organization uses the series as a way to boost community engagement and bring non-athletic events to the field when it is not in use, said Kimberly Inglese, marketing and programming manager of ASU 365 Community Union.

“ASU 365 Community Union transforms the traditional stadium model from a football field that is activated seven to eight days a year into a 365-day-a-year event venue,” Inglese said.

The organization hosts other events, including a free yoga series, where local instructors teach twice a week both in person and online for select sessions, and a concert series where they will be bringing artists Japanese Breakfast and D Smoke.

For the “Movies on the Field” series, the organization typically likes to include an interactive component or a theme for the movies it shows, Inglese said. 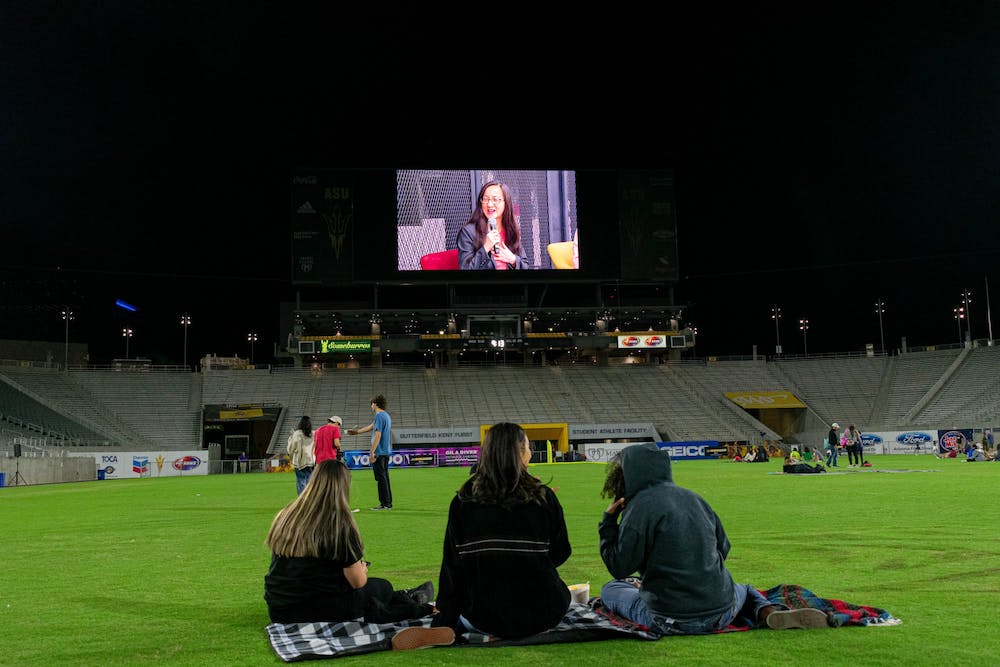 ASU students watch the live panel discussion on the big screen after the movie at Sun Devil Stadium in Tempe on Saturday, Oct. 16, 2021.

The most recent event in the movie series featured the Oscar-nominated film “Minari” and offered a taste of Korean culture through a collaboration with Hawker Street Market on  Oct. 16.

In 2019, a collaboration between Hawker Street Market and ASU 365 Community Union began for “Movies on the Field,” where the community union streamed the live-action version of “The Lion King” and the market brought vendors for Foodie Bowl.

ASU alumna Cindy Louie, the founder of Hawker Street Market, said she was inspired to recreate the feel of hawker markets that are found in places like Singapore, Malaysia and Hong Kong.

By doing this, she creates immersive experiences that bring attention to smaller, family-owned businesses.

To fit the theme of “Minari,” a 2020 A24 movie that follows a Korean-American family living in Arkansas, Hawker Street Market provided Asian American and Pacific Islander-owned food trucks, vendors and stalls where visitors could purchase popular Asian fusion snacks and drinks, jewelry, vintage and streetwear clothing items, and K-pop merchandise before the movie started.

Minari was nominated for six different Oscar awards, including Best Picture. Of the six, Youn Yuh-jung, who portrays Soon-ja, received the Oscar for Best Performance by an Actress in a Supporting Role.

The majority of the action happened near the southeast section of the stadium, with food trucks stationed outside the entrance and vendors selling their items in concessions and along the indoor portion of the stadium.

Attendees could set up and spread out their newly purchased food and other items on the field while viewing the movie on the big screen.

The market also hosted its own version of the challenges from “Squid Game,” although this time there were no scary figures in red jumpsuits coming to “eliminate” players.

Throughout the night, guests had the option to sign up for a chance to play the honeycomb game live, where only 10 lucky contestants were chosen.

For those not selected, dalgona candy with the iconic umbrella imprint was for sale at the Drunken Tiger food stall.

After the event, there was a livestreamed panel featuring filmmakers and other guests.

The event brought in a good crowd, with most of the field filled up for the movie and food trucks selling out during the night.

Sophia Lovasz, an ASU Venture mentor and store director of the Sun Devil Marketplace, came to the event with her family.

She noted that this was the first time she had ever been on the field of the stadium in 10 years of working at the University.

“The fact that the event was free was a really cool thing to do for the community and a great way to bring people in and experience a different culture,” Lovasz said.