As part of ongoing research efforts, students and staff at ASU are studying the effects that missing and murdered Indigenous women have had on the Indigenous community and how those effects change and overlap with students' college pathways.

According to a 2020 report from the Research on Violent Victimization (ROVV) Lab at the School of Criminology and Criminal Justice in partnership with the House Bill 2570 Legislative Study Committee, there were 160 Indigenous women and girls known to be missing from Arizona from 1976 to 2018.

ROVV and some ASU students are working to act on those findings, continuing the existing research this year to focus on the ways the disproportionate number of missing and murdered Indigenous women affect the University community.

Kayleigh Stanek, a junior doctoral student in the School of Criminology and Criminal Justice and lab manager of the ROVV Lab, was one of the students who worked to complete the report last year.

"(The data) showed that women were disproportionately represented in homicides. A higher ratio of women were being killed and they were being killed at all ages," Stanek said. "But overall, it showed that this crisis is impacting a lot of people, and it doesn't discriminate between age or gender. It just shows that Native Americans are at a higher risk for violence and for going missing."

According to Stanek, the lab examined the Uniform Crime Reporting (UCR) Program and the National Missing and Unidentified Persons System (NamUs), among other databases, in order to gather statistics and find correlations about the missing and murdered Indigenous population in Arizona.

The final report included a look into the history of violence against Indigenous people, dating back to the colonization of America.

"Because of racism and a power differentiation, white women have been seen as more worthy of attention and resources compared to Native American victims or victims of color," Stanek said. "This is also a key proponent of erasure of the culture of Native people that has been occurring since the beginning of the U.S. government."

The team used the data from its study to create recommendations for legislators, law enforcement and victim services to attempt to address and reduce this problem.

Missing white women syndrome is more relevant than ever with the Gabby Petito case. Indigenous women go missing for many of the same reasons, but their cases receive little media attention. These women and their families deserve the same respect, resources, and attention. #CRJ598 https://t.co/TpMCHXB4y9

Discussions of missing and murdered persons were recently catapulted into nationwide attention after the relentless coverage of the case of Gabby Petito, a 22-year-old woman who went missing while on a cross-country road trip and was found dead late September.

The nation analyzed her case, from The New York Times to The Washington Post to USA Today; each element of the case was on public display, from police reports to Petito's social media posts.

The media attention that Petito's case received provided a stark contrast when it came to the hundreds of disappearances in the U.S. that were not white women, and reignited the fire under the discussion over coverage on missing and murdered Indigenous women.

Indigenous women go missing at disproportionately high rates, but are not given the same amount of national coverage and attention as many white women, Petito included.

Cassie Harvey, research assistant at the ROVV Lab and second-year masters student in the School of Criminology and Criminal Justice, grew up in LeChee, Arizona, which is on the reservation of the Navajo Nation. She began her work on the project this year and was drawn to it due to her personal experience with the issue at hand.

"When I was younger, my best friend was murdered. We, her family and friends, classified it as a murder. (Authorities) classified it as an unknown or a suicide," Harvey said. "Looking back, I was just very frustrated at the situation. Her family not getting the answers that they wanted is something that made me interested in criminal justice — because of those systematic and institutional barriers that Native people face."

Harvey is working with Stanek and other members of the ROVV Lab to analyze whether University services are adequate for Indigenous students. They hope to help the community through examining how students' backgrounds have impacted their college journeys.

"We want to focus on their experiences and see how that can inform both policy and practice on not only the state but the University level," Stanek said.

ASU students' involvement in the effort to bring awareness and justice to missing and murdered Indigenous people doesn't stop at research. 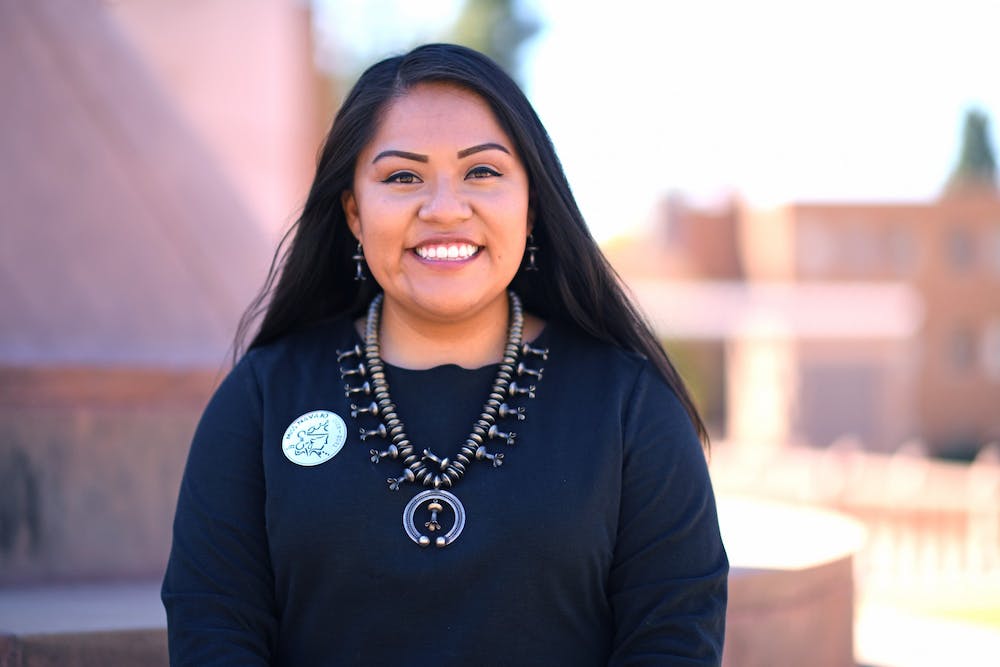 ASU graduate student, Shaandiin Parrish, poses for a photo on ASU's Tempe campus on Wednesday, Oct. 6, 2021. The former Miss Navajo Nation is raising awareness for missing and murdered indigenous women by working directly with the chief of police and the executive director of public safety for the Navajo Nation.

Shaandiin Parrish is a graduate student at the W. P. Carey School of Business, but in her community she is known more commonly for holding the title of Miss Navajo Nation from 2019 to September 2021.

"In an official sense, the role of Miss Navajo Nation is to be the ambassador of the Nation. But in a community sense, Miss Navajo is everyone's mother, sister, aunt, friend. I am expected to be that female role in the family," Parrish said.

The title of Miss Navajo Nation is won through a four-day pageant, in which young women display their knowledge of Navajo culture, tradition and language, and exhibit an understanding of government and ambassadorship.

The movement Missing and Murdered Indigenous Women, or MMIW, seeks to bring attention to the high murder and disappearance rates of Indigenous people, particularly women. As Miss Navajo Nation, Parrish was a leading voice advocating for MMIW.

"I think that the term 'missing and murdered Indigenous people' is a term in 2021 that is a topic of discussion on social media," she said. "But this is something that in my culture, in my community, in all of the tribes of the United States has always been a prevalent issue, so prevalent that we didn't realize how disturbing it was because it was so common."

Parrish worked directly with authorities such as the Navajo police chief and the executive director of public safety for the Navajo Nation to inquire about the data surrounding missing Indigenous persons, as well as to understand the shortage of police officers in the Navajo Nation.

In October 2020, she was appointed to the Navajo Nation president's work group, and was responsible for providing guidance to the Nation surrounding missing and murdered Navajo people.

The work of Parrish and the ROVV Lab displays an effort to bring not only awareness to the problem, but to institute a systemic change in the attention and police resources given to missing Indigenous people.

These goals are reflective of Indigenous communities' demands in the aftermath of the sensationalized Petito case, who argue not that Petito's case deserves less attention, but instead that missing Indigenous persons should have media attention of the same caliber. The hope is that with more media coverage, there will be an increased pressure on law enforcement to solve cases regarding MMIW.

"The (Indigenous) people who are missing, they are just as important — they're people too," Parrish said. "I just really hope and pray that we continue to make missing and murdered Indigenous people and women a part of the conversation, because our missing and murdered numbers are so high."

Sadie Buggle is a full-time reporter for the Community and Culture desk at The State Press. She was previously the editor-in-chief and news editor of her high school newspaper.