All They Do Is Win

ASU's triathlon team has been making a name for itself deep in the heart of Tempe. With five consecutive national titles, the team boasts the most of any ASU program since 2015. The yearly trophy has become as much a tradition as the whitewashing of A mountain prior to football season.

"It's a lot of pressure, but at the same time, we all bring our best to our practices and to the team," graduate student Kyla Roy said. "We're confident that what we’re doing is enough, and if we all do that then maybe the outcome will be what we want."

That success, though, has largely gone unnoticed outside the ASU community. For all of its accolades, the team hasn't built the same following as other sports.

"I don't think the team has a chip on their shoulder," head coach Cliff English said. "They are well aware that we are an emerging sport, but they also know that they are a big part of driving the sport forward. It certainly drives them."

English hopes the sport and its recognition will grow through an NCAA certification process years in the making. Currently, USA Triathlon is the governing body for the 37 schools competing for the national title in Tempe. In order for the sport to be officially recognized by the NCAA, there must be 40 schools.

"It sounds like we should be able to get to 40 soon," English said. He added that the NCAA process can take up to 12 months, but he's hopeful the sport will be adopted by the governing body within the next few years. Once that happens, they'll take over planning for keystone events, like the national championship.

"We'd love to see the national championship stay in Tempe forever," assistant coach Nicole Welling said. "But honestly, just seeing the sport continue to grow and really come into its own is good enough for us."

That national championship event is a personal cause to Welling, as she oversees the planning committee. After the race was canceled last season due to COVID-19, Welling doubled down on preparing this year's competition.

"It's super exciting to have them back," Welling said. "We love racing in Tempe. There's nothing better than being able to have the crowds on the Mill Bridge."

While most of the meetings for the host committee have taken place on Zoom, Welling said the energy and passion they have for triathlon shines through.

It's the passion driving those involved to push for NCAA recognition. English hopes with an official NCAA designation and the attention brought by becoming a Division I sport, the triathlon team could receive some of the attention typically reserved for programs like football and basketball.

"I think within our own institution, once we become an (NCAA) championship sport, those 100 points toward the Director's Cup will go a long way and put us well within the top 15," English said. "I've always been someone that sees myself as a team player and a contributor, and I personally cannot wait to be able to do that for ASU."

The Directors' Cup is a yearly ranking of Division I schools by Learfield IMG, which accounts for all NCAA programs and their success. Last year, ASU finished 20th, but English hopes with the addition of the triathlon points, it could push the school upward in ranking.

Even for graduating athletes like Roy, an NCAA designation is appealing.

"I think it's pretty cool to be a part of it," Roy said. "Even though I won't be here I will have been part of an emerging sport, which is pretty cool."

For now, though, Roy is locked in on what will be her final season. A team leader and one of the top racers, she entered Saturday's race ready to make the most of the opportunity to win gold one final time.

"It's exciting," Roy said. "It's a little nerve-wracking because we haven't raced in so long, but when we were training last year we had (this year’s national championships) in the back of our minds the whole time."

The team as a whole has benefitted from that mindset of persistence and dedication. Coming off a year where they couldn’t compete in any events, English said it's been a revelation to finally test their skills again.

"It's really cool to be back doing what we’re here to do, which is to compete," English said. "It's nice to be able to train but after a while you need to see where you're at."

The return to a regular schedule has been cathartic for most, but for some it's even more meaningful. Roy and fellow graduate student Hannah Henry were seniors when the 2020 season was canceled, and they believed they may never don the Sun Devil uniform again.

Now, they return to pursue master's degrees while competing for one last national title. 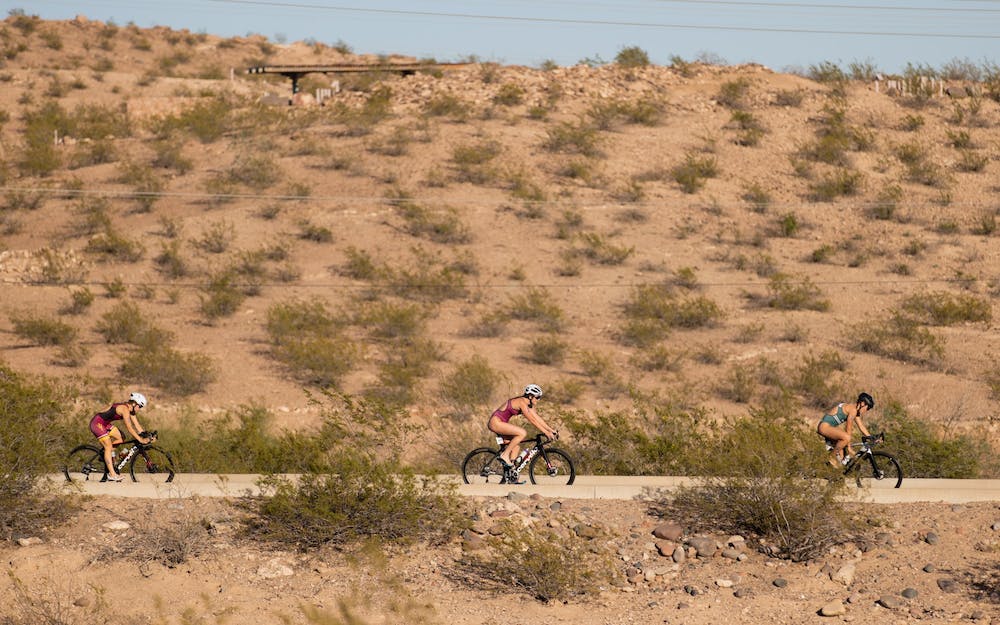 English says both women are in the midst of their toughest semesters yet in terms of academics, but they haven't let it stop them from pushing forward on and off the course.

"They were here training all summer long," English said. "They're really excited about it."

The devotion and competitive spirit permeates the Sun Devil team. A full-scale return has come naturally to a program which has won five straight national titles, but that doesn’t mean there haven’t been some hiccups along the way.

Roy said returning to full team practices was "weird-good" after a year of training in pods. She says during the stretch she missed her friends — training without them was a challenge. Now, her biggest hurdle is helping the current sophomores and freshmen assimilate into the team environment.

"They're just so excited to finally get to compete," Roy said. "They bring a good vibe to the team."

The pandemic also provided the coaching staff with some extra time to pursue other projects. One such venture for English and Welling was setting up a coaching certification process English felt could help grow the sport.

The fifth-year coach brought his coaching family together for a clinic, educating his fellows on the intricacies of coaching triathlon and "filling in the gaps" left by other coaching certification programs.

It's this desire for growth and the betterment of everyone involved in the sport that makes English and Welling such respected leaders within their program. During the pandemic, when schools around the country were furloughing employees and cutting programs, English said they never felt threatened.

"It's one of those things that comes down to economics, and we're all old enough to know that we're very lucky to have the leadership we do," English said. "Ray (Anderson, ASU's athletic director) maintained that he was never going to drop programs or have furloughs."

English said he realized just how fortunate he was when his fiancé, who works as an IT specialist at the Mayo Clinic, was furloughed for a few weeks.

"We never went through that (at ASU), and we're quite grateful for that," English said.

This sense of security allowed the team to continue working and evolving, creating an atmosphere where winning isn't just expected, it’s part of the culture.

While this marks the final season for Roy, it's also the culmination of everything English and Welling have worked for. With their fifth consecutive national championship win, the team is in rarefied air.

Only 12 programs across all NCAA Division I sports have won five or more championships in a row since 1990. Should the NCAA bid be approved by next season, which is English's hope, it will mark the end of the triathlon team's status as an uncertified sport.

When the athletes crossed over the Mill Bridge on November 13, they carried five years of hard work and dedication with them.

More than a race, this year's competition was defined by the team's resilience through a year's worth of work. And, hopefully, a new beginning.