Following a rough two-game road series at Clarkson in which ASU was swept, the Sun Devils will look to get back to their winning ways this weekend. The Sun Devils will welcome the No. 2 Minnesota Golden Gophers for a two-game set starting Friday at Mullett Arena.

These next two weeks will no doubt be the toughest for ASU, hosting the ranked team before traveling to face No. 1 Denver next week. Head coach Greg Powers knows this is the biggest stretch for his team this season.

"It's a great opportunity. That's how we have to approach this and look at it, as a top team in the country coming into our new building," Powers said. "That's exciting for our program and exciting for our fans. We're hoping to put on a good show."

Powers and the Sun Devils suffered their second road sweep last weekend at Clarkson. A heartbreaking 2-1 loss on Friday saw the Sun Devils surrender a game-winning goal with 16 seconds remaining. On Saturday, the Sun Devils found themselves up early, but a combined five goals surrendered in the final two periods left Powers scratching his head.

"When you hold a team on the road to under thirty shots two nights in a row, and you out-chance them both nights, you don't expect to get swept," Powers said. "We mismanaged the game in critical areas that you just can't mismanage, especially on the road against good teams, and it was a lesson learned."

ASU rode a five-game winning streak entering the Clarkson series. They now sit one game over .500 at 7-6 on the season, with plenty of games to go. However, that does not take away from the significance of these next two series.

"I think the margin for error is really low, we can't really afford any more losses, especially on the road, just because road wins help us a lot in pairwise," said graduate student forward Demetrios Koumontzis. "You have to get past the weekend that we just had, but you kind of have to use it as a learning point for this weekend against Minnesota, but all focus is on puck drop come Friday night." 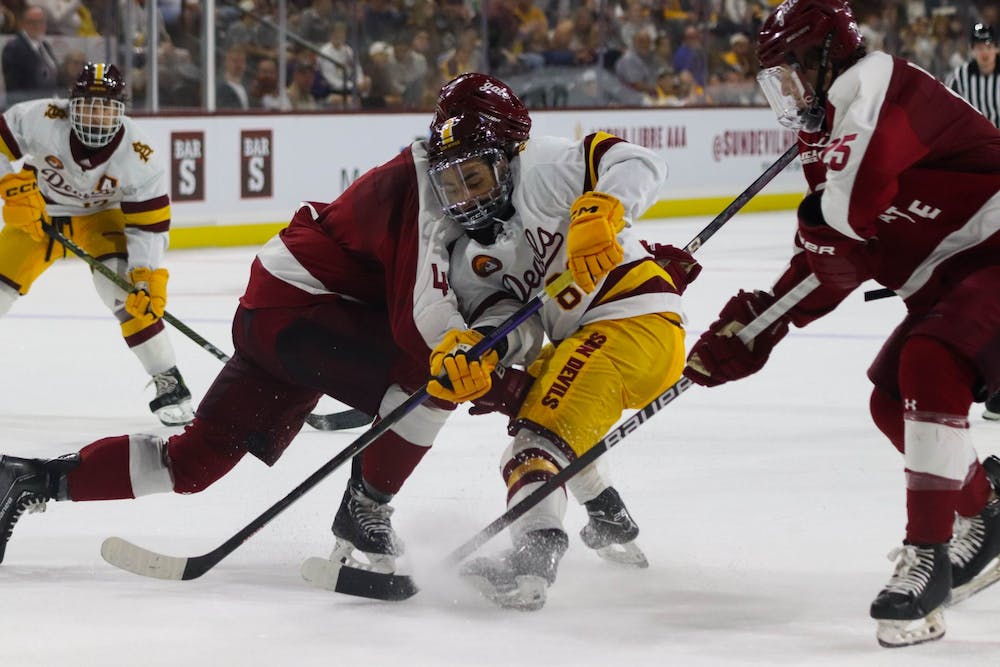 The injury bug has seemed to find its way to Tempe, with five starters missing time to injuries as of late, Koumontzis being one of them. The team's depth was one of the keys to the Sun Devils' hot streak, but ultimately the injuries caught up to ASU.

"We were incredibly thin, we missed those five guys you know, (sophomore forward Jackson) Niedermayer, (freshman forward) Charlie (Schoen)," Powers said. "(Sophomore forward Jack Jensen) got hurt his first shift of the weekend, and (freshman forward) Ryan Alexander, then (Koumontzis) was maybe 50% all weekend. So just the depth wasn't there, we're hoping to get a couple of them back this weekend and we're looking forward to that."

Powers said he doesn't expect all five of his injured guys to return against Minnesota, but does expect at least one or two to return to the lineup.

Not many players remain on this Sun Devils roster from the last time these two teams played. Luckily for the new guys, they didn't have to experience the 10-0 loss followed by a 10-2 loss the following night back in 2021.

Koumontzis is one of the few remaining players from that ASU squad, giving him a very different perspective heading into Friday's clash.

"Those are games we don't forget, and I know the new guys here care about that and want to make it a big proving point," Koumontzis said. "Minnesota doesn't really respect us much, and that's fine. They can do whatever they want, but now it's time for us to show them that we're not a joke and we're ready to mean business."

"He's starting to come into his own. He'd be the first to tell you he had a little bit of a slow start by his standards, not by normal player's standards, but now he's really going," Powers said. "He's starting to play really, really good hockey at a time we need him to, especially with the guys we have out and the lack of depth up front we have right now."

Doan has made himself a massive problem in front of the net, using his size to cause chaos in front of the goal. His presence has not only led to more goals for himself but even opened the door for teammates to get in on the scoring tally. Powers instills the importance of net-front play in his players. 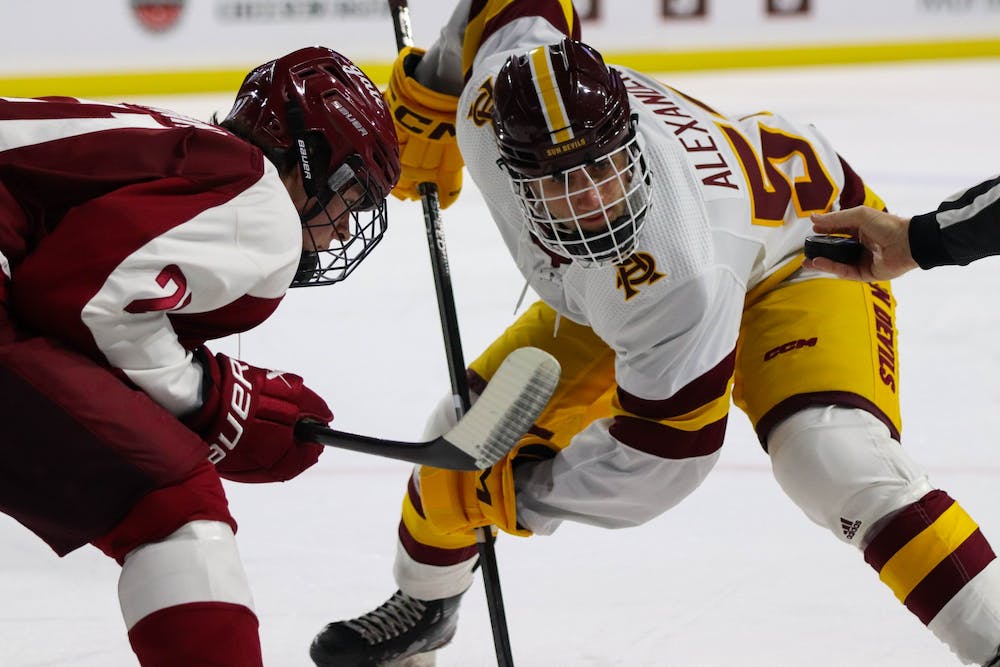 The addition of junior forward Lukas Sillinger to the Sun Devils' first line has no doubt benefited Doan. With Sillinger tied for the second most assists on the team at seven, Sillinger knows his opportunities in front with Doan will continue to come.

"He's a big body and a really smart and skilled player. (I'll) be looking to get the puck down low there lots more," Sillinger said.

If ASU truly feels it can contend for a spot in the Frozen Four this season, these next two series will prove pivotal.

"We have to continue to defend really well, but we've got to manage the game in critical areas that we just didn't do at Clarkson," Powers said. "Minnesota is really good, they're going to get their chances, so we have to be difficult to play against in our own end, and the best way to defend Minnesota is to make sure they don't get the puck."

It's a blackout at Mullett Arena this Friday, with puck drop on the Sun Devils' biggest series so far this season slated at 7 p.m. MST, and game two scheduled for Saturday at 7 p.m. MST.