Twenty-seven years later, the legacy of the Tiananmen Square Massacre reminds us of the importance of student activism and the dangers of historical revisionism.

On June 4, 2016, I stood in the middle of a clean, yet crowded, plaza in Beijing, China, my feet pressing against cement blocks that once hosted pools of blood. It was the 27th anniversary of the  Tiananmen Square massacre. I made my way through the Beijing subway system, which was crawling with increased security presence, in order to see what was being done to commemorate the tragedy.

As it turned out, there was not much to see. The square looked much the same as it had when I visited two weeks prior — teeming with Chinese and international tourists holding umbrellas and looking around excitedly. To my left I saw photographers anxiously attempting to persuade visitors to pay them for a staged picture, and to my right were oddly placed food trucks selling concessions.

As a student, I came to Tiananmen Square hoping to witness historical memory, but what I found was historical erasure made possible by  government-led revisionism and collective forgetting.

Almost three decades prior, on June 4, 1989, the Chinese government responded to pro-democracy protestors who had occupied Tiananmen Square with “50 trucks and as many as 10,000 troops.” Encyclopaedia Britannica states the Chinese government placed the resulting death told at 241, with around 7,000 wounded, but The New York Times notes that other death estimates range in the thousands.

In American schools, Tiananmen Square is taught as a tragedy not only because of the loss of life it represents, but also because of the way it challenges democracy and fundamental democratic freedoms: speech, expression, protest.

With this knowledge, ASU student Eric Arellano visited the square on June 4 with “a lot of anxiety and expectations” and was surprised to find that in reality “it felt like a normal day.” Although Eric also observed increased military and police presence, he described this presence as “discreet,” as though the government was trying to create an image of normalcy.

This "image of normalcy" projected by the Chinese government on the anniversary of the Tiananmen Square Massacre is a monument to  historical revisionism and is carefully reinforced through many mediums. TIME explains that the government’s “extensive censorship apparatus” employs two million online censors and restricts the search term “Tiananmen Square,” as well as related words and phrases and some combinations of the numbers six, four and 1989 which could reference the incident’s date.

Like Eric, I had been warned against visiting the square that day because of potential political instability. We were told that security officials might interpret the presence of visitors who knew the significance of the date as a threat. The State Department  released a statement condemning the Chinese government for harassing and detaining people wishing to "peacefully commemorate the anniversary."

Still, I chose to go to the square out of a compelling urge to reflect on a day that was infamous to me but covered up throughout China. I felt that the peaceful protestors who had died in Tiananmen Square deserved to be remembered.

As I maneuvered through military checkpoints and darted my eyes around the square guessing at who could be a plainclothes guard, the shame of the situation dawned on me. I should not have felt so afraid to remember, reflect upon and mourn what that day represented.

I wanted to scream out at the people I saw in the square, “Don’t you know what happened here?” Two women with thick Australian accents were being led around the square by a local guide, pausing periodically to take pictures. I thought to myself, "They must know what today is, right?" They seemed too cheery in spite of the immense weight of what today should have meant to them, and to everyone in the square.

As I stood in Tiananmen Square on June 4, I witnessed life as normal, a collective forgetting of history. This collective forgetting was due to the government’s failure to guarantee many freedoms of speech, expression and information. It served as a reminder of how fortunate I am to live in a country where I can protest, Google search and remember freely. It also served as a reminder of the importance of student activism. Many of those who stood in Tiananmen Square 27 years earlier had  been students themselves, and today it still falls on the shoulders of students to hold our schools, our governments and our nations accountable when they can. 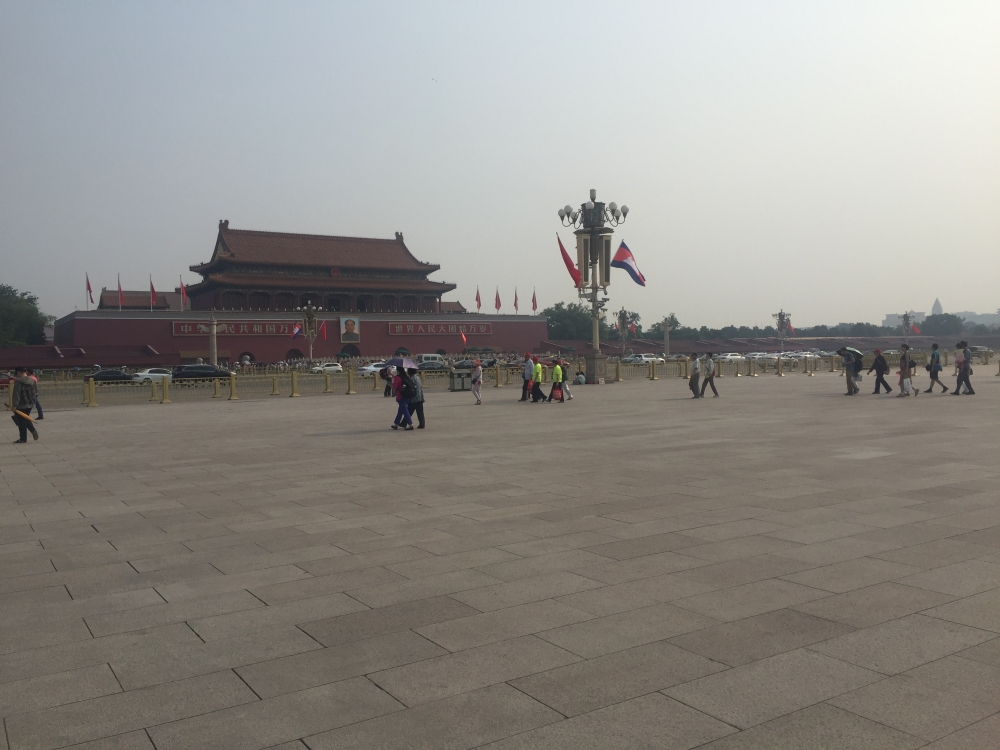 The Chinese government’s attempt to prevent commemoration of June 4 is an example of widespread historical revisionism. While it’s easy to identify historical revisionism taking place outside of our realm of influence, it can be harder to critique the altered history we implicitly accept everyday.

For Eric, reflecting on historical revisionism in China involved a realization. While critiquing the concealment of the past we had seen in the square was easy, Eric noted that as Americans, we also participate in historical revisionism, “although maybe not to the same extent.” The U.S. has dark historical legacies on many issues—LGBTQ rights, racial and gender equality, slavery, the treatment of indigenous people, international human rights and more.

As students, we must confront these dark historical legacies in order to prevent such injustices from ever creeping into the present. Purely because we have the privilege to do so, we must remember, and we must speak.