A comment was found written on a bathroom stall on ASU's Tempe campus.

The ASU Police Department is investigating a racially-charged threat in the form of graffiti found on the stalls of a Palo Verde East dorm restroom Friday.

The graffiti, which was written in marker along one of the stalls read, “We don’t want you N----rs here get tf (sic) out before we kill you. #Trump2016 KKK."

The investigation was launched after multiple ASU students posted a photo of the graffiti on their social media accounts. The graffiti was removed from the stalls by the time reporters arrived.

Cody Holt is one of the ASU students who circulated the image on Facebook.

“This image needs to be shared,” he said. “This concept, it's a pervasive element on a college setting. It's still there: This concept of racism and discrimination.”

Holt also said the profane nature of the graffiti is magnified in close quarters.

“They wrote it in a very intimate, close setting of a bathroom,” he said. “You come in there and (it’s) the first thing you see, written in big letters. It really shocks me that people would write that. It’s terrifying, this is actively targeting a community on campus.”

There was no indication as to who wrote the graffiti or when the comment was left. 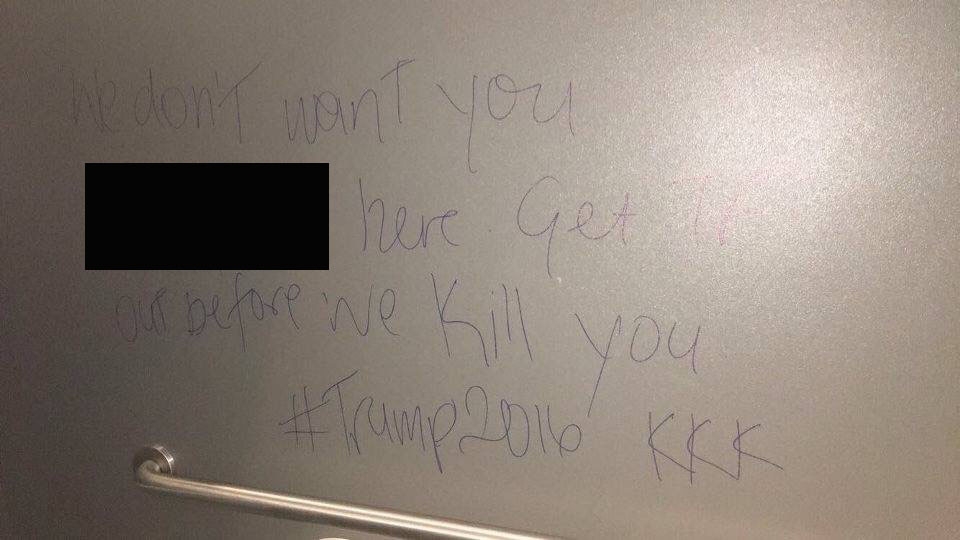 In an emailed statement to The State Press, ASU officials confirmed the incident and denounced the message, saying that it does not reflect the character of the University.

“The graffiti that a student found in an ASU dorm is saddening and does not represent the views of the ASU community,” the statement read.

ASUPD Sgt. Joseph Morel confirmed an investigation was being launched on the incident, but was unable to comment further at the time of publication.

“Ensuring the safety and security of our students is a top priority, and the University undertakes extensive efforts to ensure that our community is inclusive and respectful of everyone,” the ASU statement read. “ASU is a place where open debate can thrive and honest disagreements can be explored, but not when hateful rhetoric is used. This is not who we are.”

Editor's Note: State Press reporters are currently investigating the situation further and will continue to update the story.