Trump's controversial rhetoric preceded chaos in the Valley streets as police used tear gas and pepper balls to disperse crowds that amassed at the end of the rally.

Immigration, a major political issue in Arizona, took center stage as the president reiterated his promise that there would be a physical wall along the U.S. and Mexico border.

Trump also mentioned the possibility of a government shut down if Congress would not vote to fund the barrier in upcoming budgetary debates.

"We are cracking down on sanctuary cities and we are building a wall on the southern border," Trump said.

Though the wall has been criticized by Democrats and some analysts on both sides of the aisle, it maintains popularity among Trump supporters.

“I am for an easier pathway to citizenship, but I am not exactly for illegal immigration,” said Ibu Oluyi, an economics freshman.

He said he supports a pathway to citizenship for children who were brought to this country as children, but did not support doing so for adults who crossed the border. 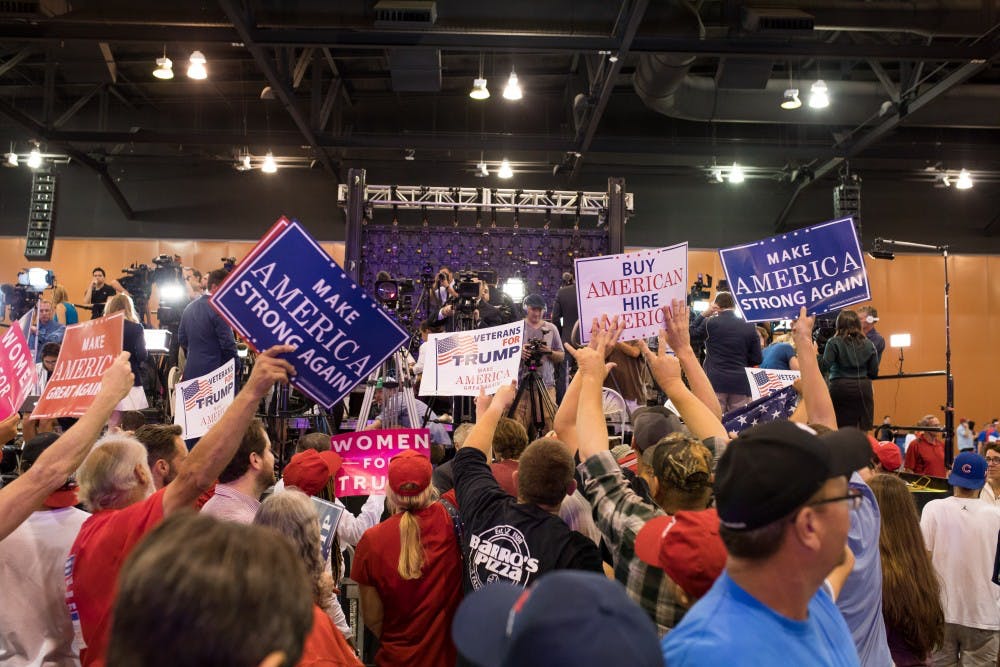 Crowd members face the press box and hold signs toward members of the media at President Donald Trump's rally held at the Phoenix Convention Center in Phoenix, Arizona on Tuesday, Aug. 22, 2017. Photo by Celisse Jones.

Trump also hinted that a pardon of former Maricopa County Sheriff Joe Arpaio, who was convicted of criminal contempt of court earlier in July, may be in the future. However, he did not pardon the sheriff Tuesday.

"I'll make a prediction I think (Arpaio is) going to be just fine, but I won't do it tonight, because I don't want to cause any controversy," Trump said.

Phoenix Mayor Greg Stanton has criticized the timing of the rally throughout the week, as it closely followed violence at a white nationalist rally in Virginia last week.

Even some of the president's supporters inside the convention hall acknowledged the unfortunate timing.

"Is this an echo chamber for him essentially to boost his own ego, or is this a place where he is going to deliver on some real policy," said Benjamin Gruca, a marketing junior who voted for Trump in the general election. "That’s what I am here to witness.”

Jacob Acuña contributed to this report.