ASU football heads into week three for a season-defining matchup

After a home loss in week two against San Diego State, ASU will take a trip to Texas for the team’s first away game of the season. Going into week three, the Sun Devils (1-1) will face another less-talented team, the Texas Tech Red Raiders. 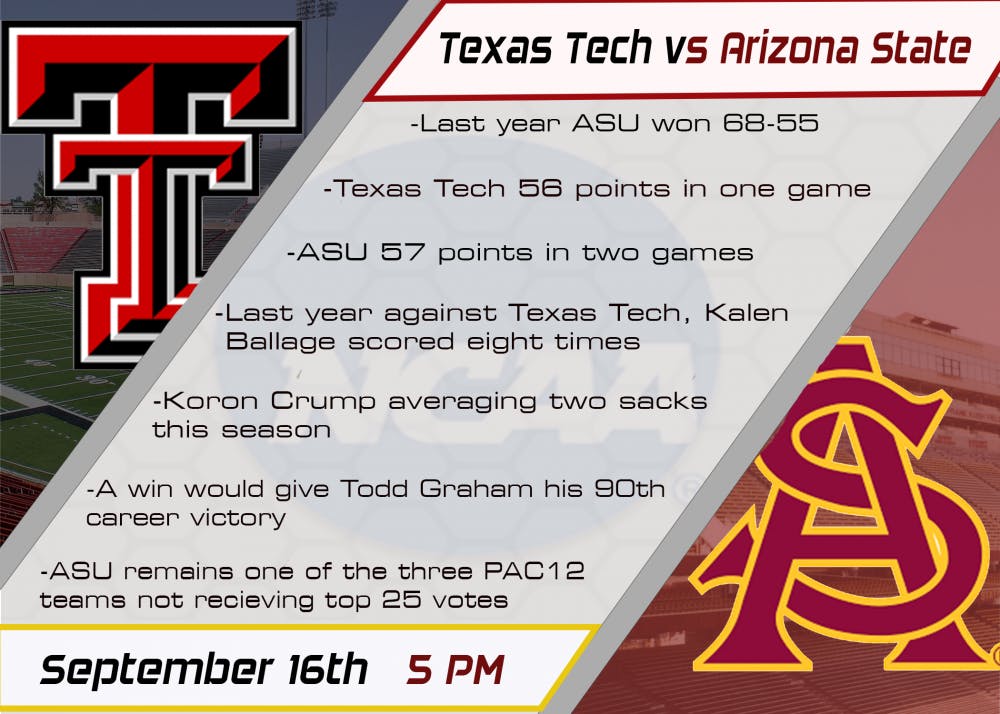 Not everything is bigger in Texas

Everyone knows the saying, but when it comes to the Red Raiders pass defense, it gets thrown out the window.

ASU’s redshirt junior quarterback Manny Wilkins and company put up 68 points on Texas Tech a year ago. Now both teams don’t necessarily have the same weapons, but the roster turnover doesn’t seem to benefit the Red Raiders.

As a team they have given up 40 points per game or more on average since 2014. This team has not been able to defend the pass for years, and it is deceiving to see that they only gave 220 pass yards to the Eastern Washington Eagles.

Even with a clear advantage at wide out for ASU, redshirt freshman wide receiver Frank Darby isn’t taking any chances.

This town ain’t big enough for Tech and the Devils

Texas Tech has gone over a week without playing a game, and with the extra rest, they may have an advantage against the Sun Devils.

While the Red Raiders have been watching games, the Sun Devils were busy playing SDSU. However, the game did not go as the team expected.

With the Sun Devils' first road game of the season just days away, redshirt sophomore tight end Tommy Hudson said the mentality is different than it was just a week ago.

“I kind of think it’s like a redemption. I mean just prove that we know what we can do, just try not to beat ourselves. Do things the right way, play the way we’re supposed to play, play tough, play hard, physical and just win our matchups,” Hudson said.

A win for the Sun Devils would ultimately hand Texas Tech its first home loss since November 5, 2016.

Although ASU has advantages in various position groups, the secondary will be tested by Texas Tech’s senior quarterback Nic Shimonek.

Against Eastern Washington, Shimonek completed 86.7 percent of his passes and threw for 384 yards and three touchdowns. Those are impressive numbers for a guy having to fill the shoes of a first-round draft pick in Patrick Mahomes II.

Head coach Todd Graham said his corners will be tested but said he believes his defensive backs are ready for the challenge.

“You’re going to be in a one-on-one situation with people that play four wide,” Graham said. “But I do (think they are ready). The biggest thing is figuring out how to get a win and then get ready for conference play.”

Conference games are arguably more important; however, ASU must find a way to get the job done against the Red Raiders this week. Otherwise, a 1-2 start with games versus Oregon, No. 19 Stanford and No. 6 Washington could very well have the Sun Devils looking down the barrel of a 1-5 start.

With the Sun Devils heading into week 3 with a 1-1 record, what are the chances they beat Texas Tech on Saturday?

The predictions below come from The State Press football reporters: Anthony Totri, Mark Harris and Joe Jacquez. The number next to the reporter is their record in predicting the winner each week.

*All statistics were retrieved from espn.com and cfbstats.com.

Cohlton Schultz is ready to be 'the dude' for ASU wrestling