The Sun Devils ascend in the rankings after win over Oregon

The first weekend of Pac-12 play has come and gone. Every team has played at least one conference game, which yielded mixed results.

Here are this week's rankings: 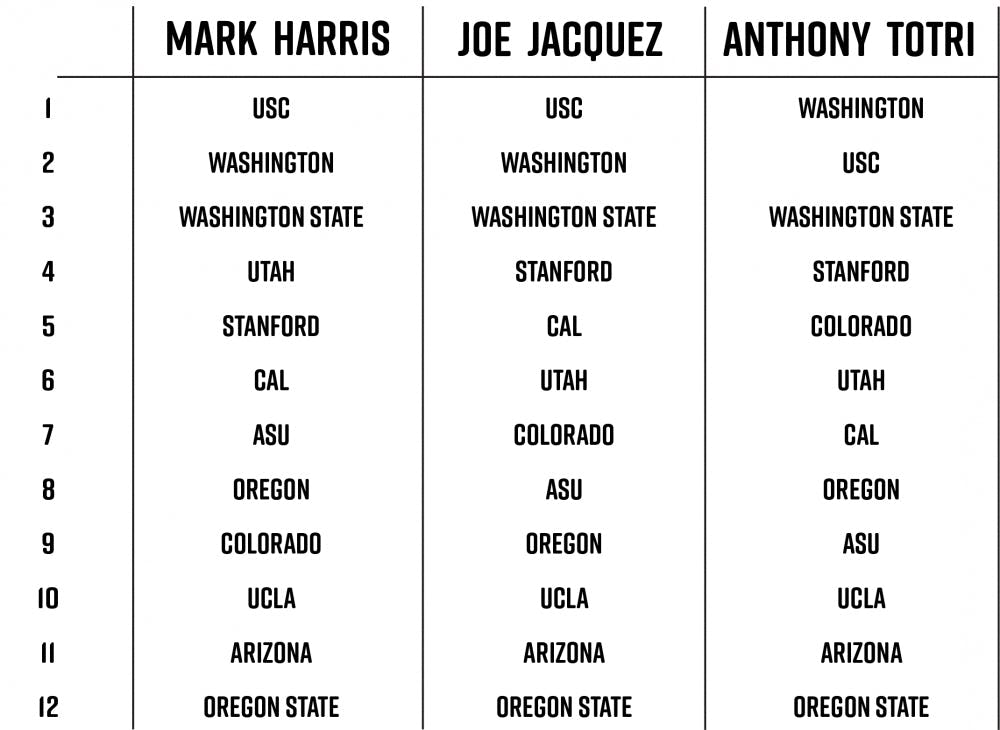 The No. 5 Trojans just keep winning. This one may not have been pretty, but it is a win all the same. Their 30-20 victory over Cal will not go down as a magnificent USC win, but with multiple starters sidelined with injuries, a road win in the Pac-12 is more than enough to stay at the top. If quarterback Sam Darnold continues to throw interceptions at this same rate, having already thrown seven, then USC will not stay undefeated.

No. 6 Washington knows how to win, even with an average performance from its quarterback. After feasting against some lower-tier schools, the Huskies responded well to their first test by slamming Colorado 37-10. Quarterback Jake Browning did not play as well as he has in the past, but running back Myles Gaskin picked up the slack with 202 rushing yards and two touchdowns. The defense stepped up too, with an interception return from defensive back Myles Bryant.

It was the only taking-care-of-business game in the Pac-12 this week, and the No. 16 Cougars did just that, by walloping Nevada 45-7. There is not much to analyze in this one, but a screen pass touchdown from WSU wide receiver Tavares Martin Jr. was impressive.

Today's call of the game is the 40-yard touchdown pass from Luke Falk to Tavares Martin Jr.!#GoCougs pic.twitter.com/xhcZRJ1s2H

The Utes did not play their best game on Friday, but they squeaked out a 30-24 win over Arizona. No. 20 Utah had to adjust when starting quarterback Tyler Huntley left in the first half with an injury, and it took a game-sealing interception for them to win, but the Utes survived.

Stanford ran for 405 yards and five touchdowns in its 58-34 thumping of UCLA. Running back Bryce Love had a lovely performance, rushing for 263 yards and a nice 69-yard score. However, a game like this is nothing new for Love, as he now leads the country in rushing yards.

The Golden Bears hung tough with USC, as evidenced by their ten-point loss. Right now, Cal does not have the talent level that the Trojans do, but they proved their 3-0 start was no fluke. Cal quarterback Ross Bowers' four interceptions in this game shows he has some room to improve.

The Sun Devils' 37-35 win over Oregon was the team's best performance of the year. Quarterback Manny Wilkins was efficient, throwing for 347 yards and a touchdown, while wide receiver N'Keal Harry had an amazing game with 170 receiving yards and a touchdown. ASU won with defense though, holding Oregon to 1-11 on third down conversions.

#MondayMotivation: Don't let Monday's slow you down. Here's to busting through the week like... pic.twitter.com/tRVuf7gBRx

This was not the best performance from the Ducks against ASU. Their 3-0 record proved to be a bit of fool's gold after their loss in Tempe. Oregon got an uneven game from its defense and did not give star running back Royce Freeman enough touches.

The Buffaloes were outclassed on their home field by Washington on Saturday. Quarterback Steven Montez tossed three interceptions and Colorado had trouble stopping the Huskies in the second half.

It seems like so much rests on UCLA quarterback Josh Rosen's shoulders. He threw for 480 yards and three touchdowns with two interceptions against Stanford, and the Bruins still lost by 24 points. Rosen is a great quarterback, and he is on the short list to be the first player selected in the 2018 NFL Draft, but he cannot do everything.

The Wildcats gave it their all against Utah and still could not pull off the win. Arizona is frisky, and they will probably give a better team an untimely loss later in the season, but expect these losses to continue for UA. Against Utah, the Wildcats' quarterback problem was exposed, with Brandon Dawkins throwing three interceptions.

The Beavers were off this weekend, and that's just as well because at least when they do not play there is no chance for them to lose.