Opinion: Fans are the root of the wage gap in sports

As the source of revenue for the whole industry, sports fans have tremendous sway in how much athletes get paid

One of the most prominent obstacles in the way of gender equality is the wage gap between men and women, and that difference is especially evident in the sports industry.

While many fans wish that female athletes were paid fairly, it seems that few realize how big of a role they play in the salaries of athletes. The fact that women’s athletics, both at ASU and in professional leagues, is unfairly overlooked is the primary reason that women’s athletics are underpaid.

The wage gap in professional sports is exceptionally self-evident. According to CNN, the U.S. women’s World Cup team earned a cold $2 million for winning the tournament in 2015 — which seems like a lot, barring the fact that the men’s team won more than four times as much ($9 million) for placing eleventh.

It's evident within ASU as well, shown through the salary gap between many of our own head coaches including the men and women's basketball coaches.

The Women’s Sports Foundation indicates that the trend of massive inequality is widespread throughout professional and collegiate sports. Despite a higher proportion of women than men in college, female athletes received only 43 percent of participation opportunities from NCAA schools in 2014.

While the organizations that decide salaries and give scholarships are easy scapegoats for this inequality, it may have much more to do with the engagement from the fans. Fan activity, such as purchasing game tickets or merchandise, directly contributes to how athletes are compensated.

Paisley Benaza, a Ph.D student at ASU's Walter Cronkite School of Journalism and Mass Communication and a global brand strategist, indicated that brand deals are gauged on the fans' interaction with an athlete, not just the athlete’s performance in the game.

“Jordan brand has endorsed (Maya Moore) and she’s one of the WNBA players,” Benaza said. “But is she selling shoes? Are the fans supporting her? If you want them to get paid more, there needs to be fans in the seats.”

Sponsors make their profit from merchandise sold, not points scored. Thus Maya Moore’s tremendous talent and hard work do not determine her income. If fans don’t buy her shoes as much as an NBA athlete's shoes, brands will offer her less money for similar endorsement deals. Fans and consumers have the power to influence how fairly or unfairly female athletes are paid. 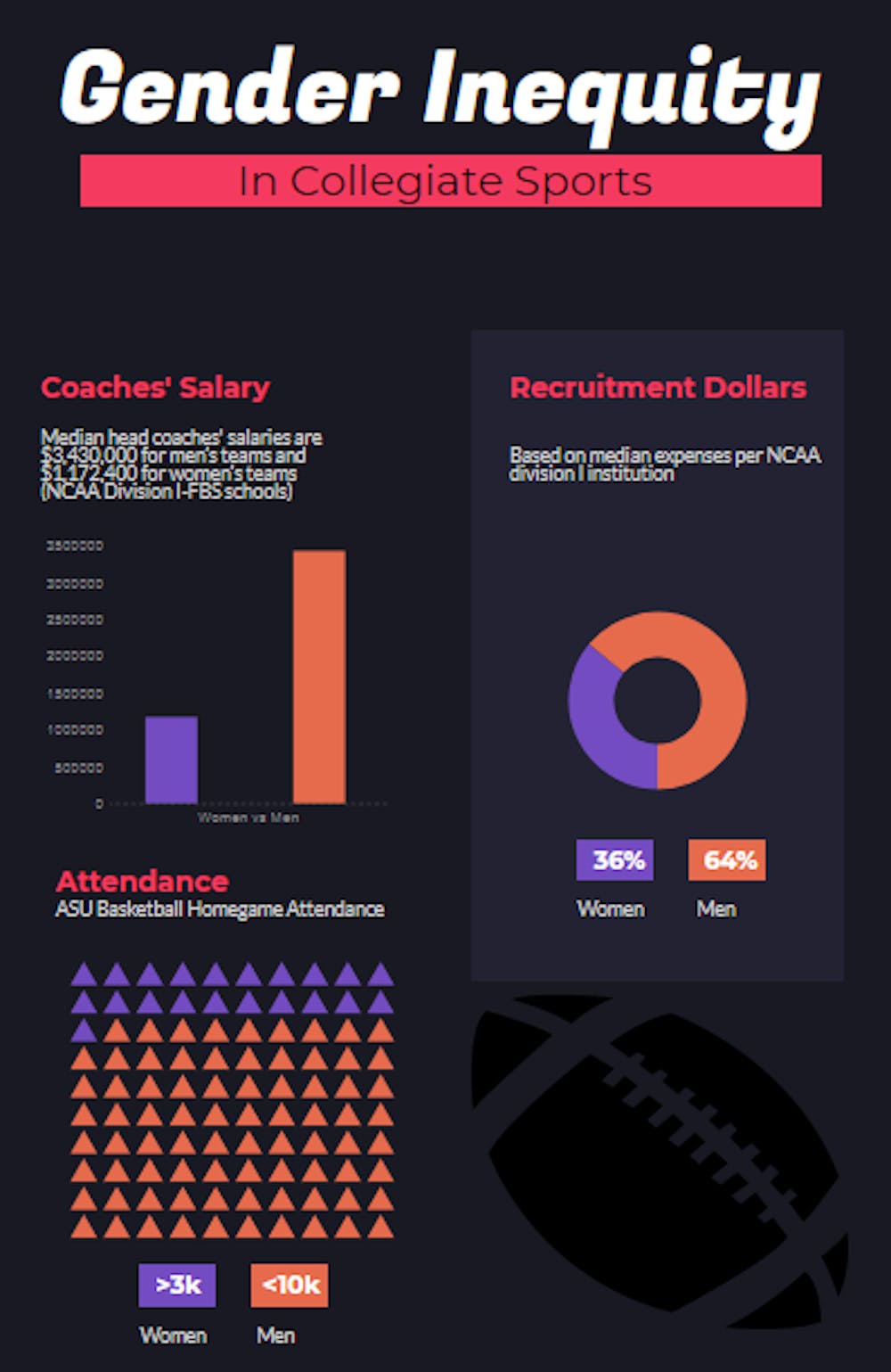 Unfortunately, consumers' biased preferences have been engrained in the athletic institutions, making it harder to undo the inequality. Some sports merchandise stores, like Tempe’s own Cactus Sports, don’t sell jerseys for female athletic teams, according the store's website.

The problem is also somewhat self-perpetuating. The lack of lucrative career opportunities may discourage some talented women from pursuing sports as a profession, furthering the engagement problem.

“I don’t think (female collegiate athletes) are looking at their exit strategy the same way that a male athlete is,” Benaza said. “They also have to consider the fact that they will still need to be working another job.”

Even many WNBA athletes have to play in leagues in other countries on the offseason to make a living. On the contrary, NBA players have the luxury of months to spend finessing their game and building their fanbase.

The institutionalization of gender inequality in sports is a hinderance, but all businesses ultimately aim to fulfill demand. If enough people want to buy women’s jerseys, local shops will have no choice but to start stocking them or lose business to a competitor that will.

Right now, there are several actions fans in favor of gender equality can take. Purchasing female athletes' merch not only contributes to their income directly but also encourages stores to support women's athletics. Wearing jerseys in public and being a vocal advocate can motivate others to do the same.

Additionally, simply going to games is surprisingly impactful. At the end of the day, the fans in the seats are the root of all revenue for any team. With free admission to any ASU athletic event, going to the women's competitions would be a fun way to kickstart change.

“Change needs to start with the consumer. It’s easy for me to say women athletes need to get paid more and tweet about it, but you have to show your support and buy a ticket and show up to a game,” Benaza said. “That’s how we’re going to get real change to monetize.”

Editor’s note: The opinions presented in this column are the  author’s and do not imply any endorsement from The State Press or its editors.

Want to join the conversation? Send an email to opiniondesk.statepress@gmail.com. Keep letters under 500 words and be  sure to include your university affiliation. Anonymity will not be  granted.