In the wake of the Oct. 27 shooting at the Tree of Life Synagogue in Pittsburgh, members of the ASU community gathered in solidarity Monday night for a vigil to mourn the 11 people who died in the attack.

The event was held on Hayden Lawn on the ASU Tempe campus with more than 100 students and community members in attendance.

Danny Goldberg, president of the ASU Interfraternity Council and a senior studying political science, said he began organizing the event as soon as he heard about the shooting.

“We were trying to pick up the pieces and figure out how we could come together,” Goldberg said.

The vigil began with the lighting of candles, a theme which continued throughout the night as speakers repeatedly urged listeners to fight the darkness and shine a light into these troubling times.

Goldberg said that tragedies like this shake the tight-knit Jewish community worldwide, not just where it takes place. 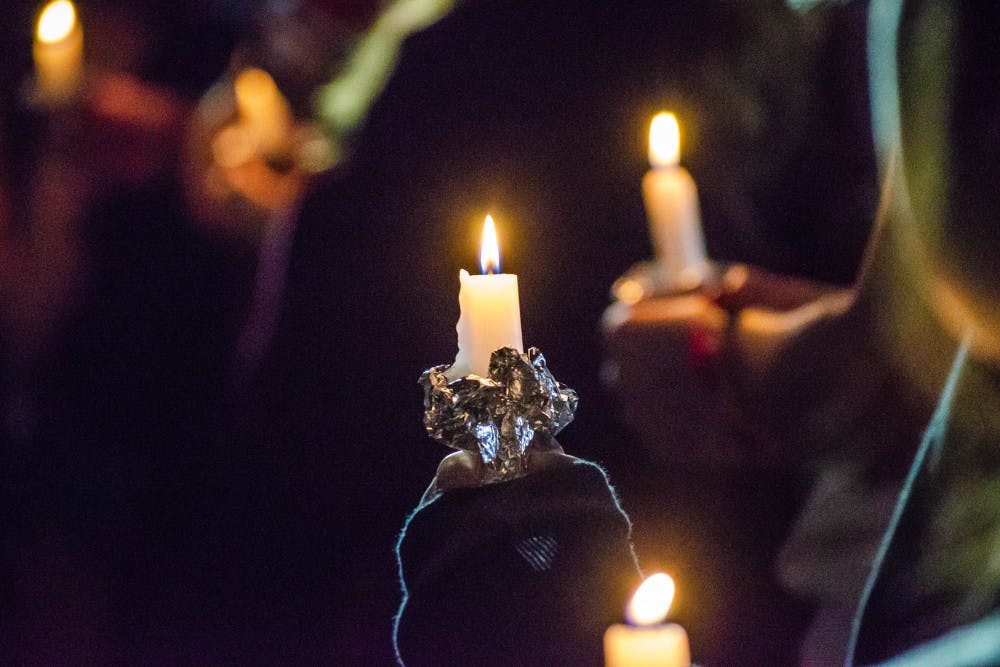 Candles are lit in honor of the victims of the Pittsburgh Tree of Life Synagogue in Tempe, Arizona, on Monday, Oct. 29, 2018.

“The fact that these were elders in a synagogue who were killed while they were praying just because they were Jewish … it’s hard for me to put into words,” he said.

Shmuel Tiechtel, Rabbi of the Jewish student center Chabad at ASU, said in the wake of such tragedy, “you don’t sweep darkness away with a broom, you chase it away with a light.”

Tiechtel said that seeing the community come together gives him strength in a time when he feels so sad and vulnerable, and that the Jewish community must channel the pain they feel into action.

Goldberg said that vigils like this one act as reminder to Jewish students that they have a supportive community here and what they can accomplish when they work together.

“Tonight shows that our generation of the future leaders can and does come together when we need to," he said, "and we need to do it more.”

The vigil featured speakers from a variety of on-campus religious organizations including Ben Sanders, co-director of the Campus Christian Center, and Omar Tawil, a junior Imam and ASU Muslim chaplain from the Islamic Center of Tempe, both of who emphasized the importance of unity and love in the face of hate.

“We’re all vulnerable,” Sanders said, “even as we seek to welcome people.”

Myles Lynk, a professor in the Sandra Day O'Connor College of Law, also attended the vigil. He said the attack on Tree of Life is another in a long line of hate filled attacks and that something must be done to stop the pattern from continuing.

“This is not just a Jewish tragedy, it’s a tragedy for Americans as a whole,” he said.

Stella Carr, a graduate student studying public administration, also spoke on behalf of Chabad at ASU emphasizing how the Jewish community must stay strong now more than ever.

“We must not let anti-Semitism push us into silence,” she said. “All it takes is a little bit of light to dispel the darkness.”