The game took place at the Basketball Hall of Fame, as part of the annual Hoophall Classic and was being broadcast nationally on ESPN. In a game Sierra Canyon ultimately won by two, Chevalier describes the pivotal turning point in the game for Sierra Canyon.

“About midway through the third quarter, Remy decided to take himself off the basketball and to put Terrance McBride on the ball," Chevalier said. "So that he could score the basketball and be more aggressive from the wing. He made this call without talking to coaches but with his understanding of the game and his leadership abilities he was able to pull it off.”

A common theme emerges when talking to anyone who has the luxury of coaching or playing with Martin – it's his ability to lead. Martin’s innate ability to elevate and motivate everyone around him has captivated the entire basketball program at Arizona State and has inspired confidence in coach Bobby Hurley.

Sun Devil fans fell in love with Martin's fiery attitude last season, as he elevated himself from likely benchwarmer, to one of the team’s most integral members come March.

As a freshman, Martin’s role was limited as he sat behind senior guards Tra Holder and Shannon Evans. With both players graduating, the onus now lies on Martin as ASU's starting point guard and de facto team leader.

“My role here is to just put my team in the best position to win," Martin said. "All I want to do is win. That’s what I play this game for, so that’s my role, as a winner.”

Similar to his playing style on the court, Martin never backs down from a challenge. His relentless energy and tenacity on the court set the bar for the rest of the team, and better exemplifies Martin’s commitment to constant intensity and effort no matter the situation. This is nothing new though, as Martin knew how to be a leader well before he donned the maroon and gold.

“He led by example for sure," Chevalier said. "By always going hard and pushing his teammates. As he developed as a point guard and grew through his high school career he became more of a verbal leader. He gained an understanding of when to call huddles, when to settle his team down and when to get them pumped up.”

The signs were evident early in Martin’s career at Sierra Canyon that he could one day star at the next level. Even amongst California’s best, Martin stood out for his skills that few at his age possessed.

“Remy had elite speed, quickness and athleticism from an early age,” Chevalier said. “But the thing that stood out the most was his ability to lead a team. No matter what the situation was, he was always able to remain comfortable in uncomfortable situations.”

Martin will likely be placed in his fair share of uncomfortable situations in his first season as the Sun Devils starting point guard. Martin is unfazed, and is excited to evolve his repertoire under the watchful eye of one of the best to ever play the point guard position in college. 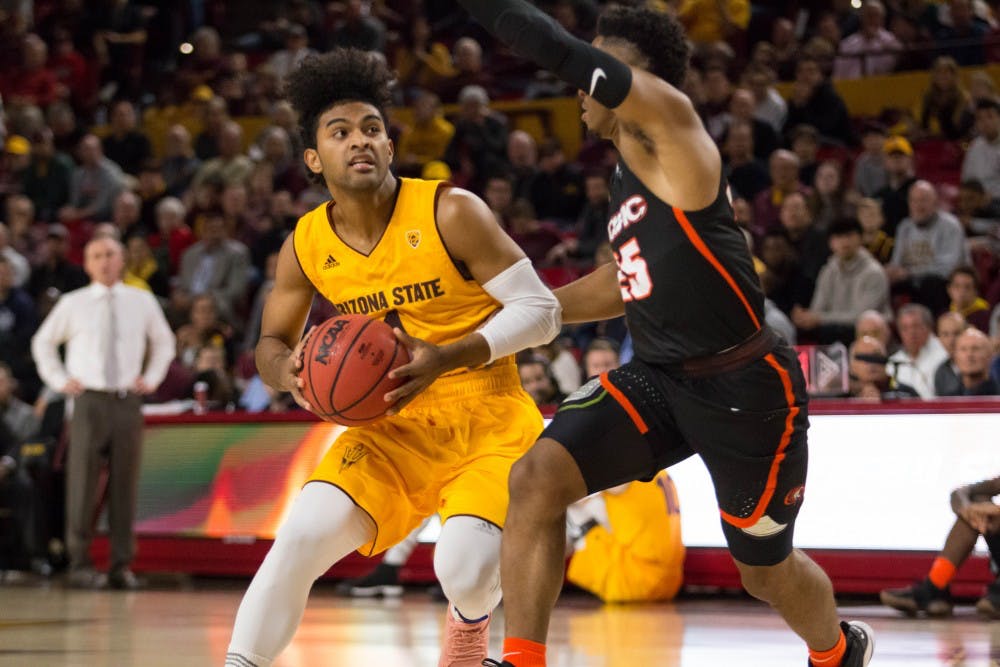 Delia Johnson
ASU freshma guard Remy Martin (1) looks to take a shot in the first half of the Sun Devil's 105-65 win against the Pacific Tigers at Wells Fargo Arena in Tempe, Arizona on Friday, Dec. 22, 2017.

“I have one of the greatest point guards to ever step on the court,” Martin said. “To talk to (Hurley) and have him let me know what I need to work on is huge. He’s done it all, he’s done everything I want to accomplish in my life, so it’s great to have a guy like that in my corner to help me with those things.”

Martin will spend much of this season as a student of the game, learning the ins and outs of basketball’s most demanding position. Early on though, Martin has emerged as a teacher as well. Freshman guard Luguentz Dort has been tasked with the difficult job of containing the speedy Martin in practice, and the matchup between the two jarringly different guards has brought out the best in both competitors.

“Guarding Remy is not easy,” Dort said. “He’s really fast, and he sees basically everything so he’s always going to find who’s open. When I guard him, I have to make sure he’s not going to get past me or be able to put up a shot. He’s a great leader though. He’s trying to teach me everything about college and basketball, on and off the court.”

Martin's identity has been forged throughout his time in high school, and sitting behind former Sun Devil guards, but now Martin's time has come, and those who have known him the longest can’t wait to see what he can do.

“He’s going to be great, whatever that looks like for him,” Chevalier said. “I’m sure he’ll infuse himself in the starting lineup, be a great leader, show his all-around game, and be an extension of coach Hurley on the court.”