Luguentz Dort still remembers the day his father and older brother put a basketball hoop in their backyard in Quebec, Montreal.

With soccer as his first passion, Dort said, growing up, he only ever played basketball for fun. Taya Hanson has a similar story as she grew up a multi-sport athlete in Kelowna, British Columbia, but basketball also wasn't necessarily her favorite.

Currently, 134 Canadians are in NCAA Division I men's basketball this season. These athletes account for some of the most highly-touted prospects in the nation, including Dort, who averages 16.4 points, 4.5 rebounds, 2.6 assists and 1.5 steals per game as a Sun Devil starter.

“I just feel like we are all doing great,” Dort said. “We feel like people were doubting Canada as a place for basketball. I feel like, now, we have proven everybody wrong, showing that Canadians can actually play at a high level. … I feel like we have shown the world what we can do.”

Women’s basketball has experienced an uptick in Canadian talent as well, having 97 athletes this season, including Bridget Carleton on Iowa State, who averages 21.3 points, 8.4 rebounds and 4.3 assists per game.

Dort said these statistics don’t come as a surprise, and he expects more Canadian talent to trickle into the NCAA. Hanson echoed Dort, adding that she feels rewarded as she plays for a Pac-12 program while representing her country.

“I am just so thankful to be one of these select athletes to have been on this journey from the past and to come,” Hanson said. “I just want to be able to empower young girls from Canada to follow their dreams and know that they also can play in the states.”

‘One of the best decisions I have made in my life’

As Dort's love for the game began to flourish, his goal quickly became clear.

Dort, now a 6-foot-4, 215-pound guard, continued to build his basketball skill set as he played his freshman season at a Quebec high school. He eventually decided to transfer to the U.S. and bounced around high schools in Florida.

Despite the experience, Dort still felt he needed to improve before arriving to Tempe. He then decided to join Athlete Institute Basketball Academy, a preparatory basketball school in Mono, Ontario, for his final high school season. This school, which was established in 2012, specializes in getting Canadian athletes ready to play at the next level.

The institute has had 27 athletes sign with Division I programs and two NBA draftees, including Kentucky one-and-done Jamal Murray on the Denver Nuggets and Thon Maker on the Detroit Pistons.

“I feel like going (to Athlete Institute) for my senior year was one of the best decisions I have made in my life,” Dort said.

Even though Dort went to Athlete Institute for only a year, he said his overall game improved tremendously, thanks to the program and its coaches, especially assistant coach Brandon Ennis.

“Luguentz has been a dream to work with,” Ennis said. “He came to me and said, 'I want to be a pro,' and I told him that I would do everything within my power to help him achieve that.”

Ennis said he would wake up at 5:30 a.m. every day during the season to meet Dort, and the two would go through special individual drills, lifting and conditioning. They would also watch film.

“With his work ethic, willingness to learn, skill set and how high his ceiling is, he has potential to play at the highest level with the best of the best,” Ennis said.

Dort said he was supposed to play for Team Canada U17, but he suffered an injury that sidelined him that entire summer. However, this past summer, Dort participated in a training camp with the senior team.

As Dort continues to improve, he said he hopes to receive another invite as Canada prepares for the upcoming Olympics.

“There aren't a lot of people from Montreal who played for Team Canada,” Dort said. “It would mean a lot for where I am from.”

As Dort continues to develop at ASU, striving to make the NBA and play for Team Canada, ASU men’s basketball coach Bobby Hurley has had nothing but high praise for his freshman.

“(Dort’s) success really opens up eyes as to how good the talent can be (in Canada) and will continue to be,” Hurley said. “Also, because he came here, (other) eyes are opened about what ASU can offer.” 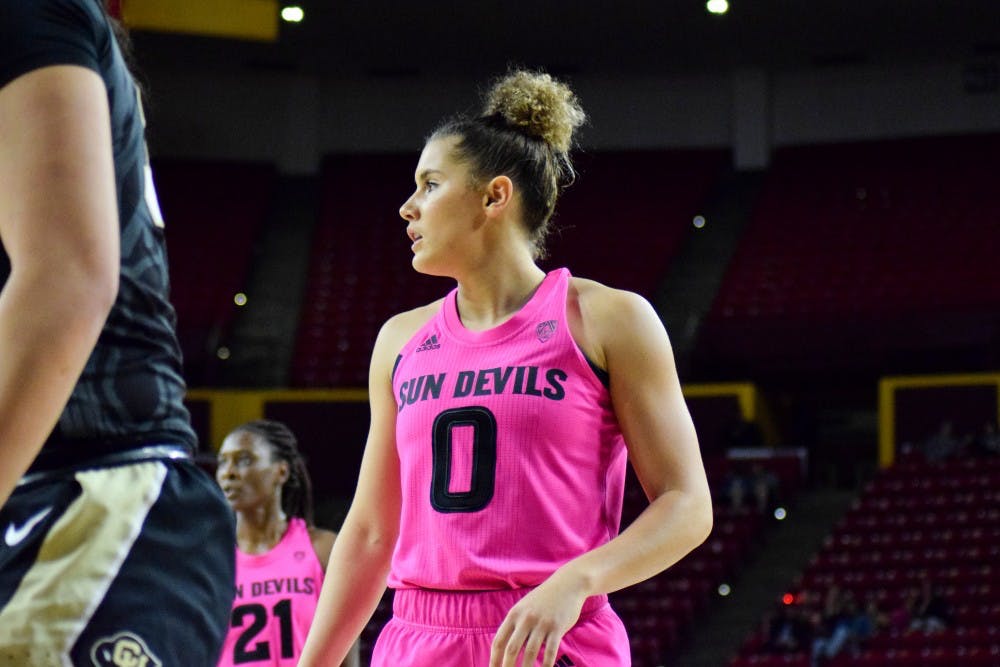 ‘She was a phenom’

Hanson discovered her passion for basketball when she was in the sixth grade. Since then, Canadian basketball has had a major impact on her life.

Hanson remembers when her father would drive her about four hours from her house to Vancouver every weekend to participate in special and elite training camps when she was younger.

Hanson has played with Team Canada for three years, and said the day her U16 team won the gold medal at the 2015 FIBA Americas in overtime against Brazil in Mexico is one of her fondest memories.

“First of all, it is just such an honor to represent your country within the sport that you love and have so much passion for,” Hanson said. “… That was just such an exhilarating game and being able to hold the flag and run around the court was an experience that I will never forget.”

ASU women’s basketball coach Charli Turner Thorne said, even at a young age, Hanson was soon on ASU's radar because of her talent, Team Canada experience and other accolades.

“She was a phenom,” Turner Thorne said. “Watching her play at that age was like, ‘Wow.’”

Hanson slipped from the recruiting radar for a while, but a relationship was eventually reconnected. Then, ASU reached out to Hanson, again, feeling she was a solid fit for the recruiting class.

“Man, the stars aligned,” Turner Thorne said. “… We really needed someone like Taya.”

With veteran players above her, including senior forward Kianna Ibis and redshirt senior forward Courtney Ekmark, Hanson hasn’t been forced to carry any pressure to score as a freshman.

However, Turner Thorne said she knows what Hanson's future as a Sun Devil holds.

“She is going to be a star in (the Pac-12), in my opinion," Turner Thorne said. "Because of how hard she works and just her talent and skill set already as a young player. She has things to work on and get better, but I think, she is going to be somewhere in our record books, if I had to predict.”

‘The fact that they do this for us is amazing’

Turner Thorne said she isn't surprised with the rise of Canadian athletes in college basketball throughout the years, recalling her time as an assistant coach at Santa Clara when Steve Nash signed with the program.

"I think it is an indication that worldwide everyone is getting better,” Turner Thorne said. “They like their hockey and their soccer, but they like their basketball in Canada.”

Throughout the years, ASU has recognized its Canadian athletes with "Canada Nights" as it realized Sun Devil communities had formed in Canada.

ASU celebrated Dort on Feb. 7 against Washington State and Hanson this past Friday against Colorado.

“Oh my goodness, it is so amazing,” Hanson said. “I am so thankful for the university recognizing that, and it is honestly such an honor.”

Dort agreed as he described the event as an amazing idea.

“It is great for us from Canada to come here and trust ASU and all the people around here,” Dort said. “They are doing things just for us for one night. I just feel like it is great because we all love to represent where we are from. … The fact that they do this for us is amazing.”