Recapping the best of The State Press' 2020 coverage

From COVID-19 to protests and elections, State Press staff revisits some of the year's best stories, photos and more

History will remember 2020. And while we head into a new year, these past 12 months will remain etched in our minds.

From the COVID-19 pandemic, racial justice movements and one of the most consequential elections in our lifetime, ASU students and employees, us included, observed the impact of these issues in the community, ourselves and across the world.

We documented it all, powering through a pandemic that brought about some of the most unique semesters to deliver compelling storytelling and impactful news across various mediums.

This collection of pieces were some of our favorites to report, read, edit, share and read again; they are stories that informed our community and brought impactful change to it.

When ASU reported its first case of the coronavirus in late January, students and employees began taking precautions to guard against it, a foreshadowing for the world they would prepare for today. A combination of 11 reporters and editors chronicled the now all too familiar steps students and employees took to guard themselves against COVID-19.

As concerns regarding the coronavirus began to heighten in late January, ASU students reported incidents of racism and xenophobia on campus. Grace Lieberman details the behaviors some faced and how, unfortunately, they are nothing new when the country faced with a public health crisis.

Timothy Xayasomloth pens a poignant personal essay about his struggles in realizing his ethnic identity as a child. From growing up not realizing he was Asian to not feeling accepted by Asian peers around him, Xayasomloth writes that nothing could take his identity away no matter how he looked or acted — "because, at the end of the day, that is what I am," Xayasomloth writes.

The U.S.-Mexico border wall tells the stories of migrants and activists not only visually but sonically. Painted with rich detail, Wyatt Myskow tells the story of an ASU professor taking her students along with a musician to Senita Basin in Organ Pipe Cactus National Monument to capture the songs of the plants, the land and the wall. 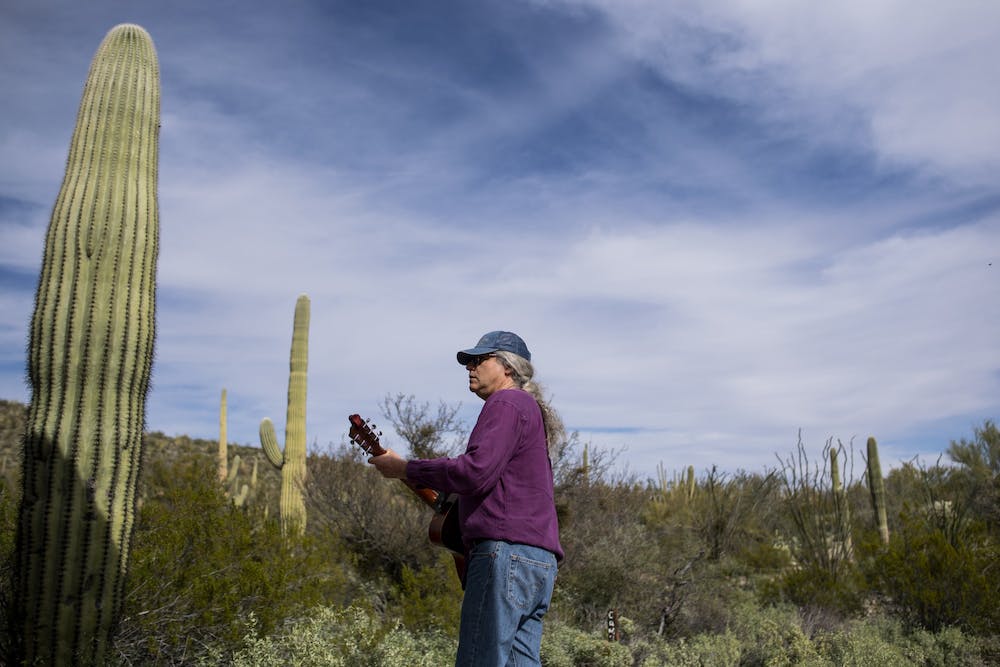 My body, my business | Garrett Stanley

ASU student Nora Kuhn, who in two months made over $80,000 on the social media site OnlyFans, a subscription-based service known for its support of safe, accessible sex work, reveals the benefits and drawbacks of operating an account of adult entertainment on the platform.

An upstart ASU hockey team had a potential national title run abruptly cut short after concerns surrounding the COVID-19 pandemic led to the cancellation of all postseason competition. Avery Klatsky displays the heartbreak suffered by players and coaches within the program after a program-best 22-win season could not be continued to a potential championship.

'This is a clusterf---': USGT candidate wins election after dropping out of race | Piper Hansen and Erin Galindo

Chaos ensued in an Undergraduate Student Government Tempe election earlier this year when the candidate who reportedly won the Teachers College senate seat had dropped out of the race and even changed his major. Piper Hansen and Erin Galindo detail the aftermath of the scramble and even more problems that arose with the ballot.

About half of USGT's members in Spring 2020 were a part of Greek Life, sparking discussions over the influence it has over policy-making decisions. Read along as Piper Hansen explains the influence Greek Life exerts within USGT and how it hinders others outside of it from running for office.

Medical workers have been the unsung heroes during the COVID-19 pandemic, but the mother of Joseph Perez continued to head into work as a nurse not to be seen as a hero, but "because she has so much compassion that she feels the need to be there for the people, scared and sick, who have nobody else." Perez describes his mother's daily experience on the floor caring for patients in pre and post-surgical care, a place where contracting COVID-19 was the most likely.

Koki Riley details the process of how ASU alumni Anthony Janssen and Ryan Dent produced a documentary around the life of trumpeter Jesse McGuire and his performance of "The Star-Spangled Banner" at Game 7 of the 2001 World Series, which drew controversy for reportedly being "boastful." Riley tells in vivid detail how McGuire's life was changed forever after the performance and how Janssen and Dent sought to tell the tale.

As news becomes more prevalent in our daily lives, how we consume, dissect and interpret it has become more important than ever. Stefano Contreras sits down with ASU professors to discuss the importance of media literacy in our rapid news cycle.

Molly Stellino and Jeffrey Mervis from Science Magazine uncover the teaching practices of Carlos Castillo-Chavez, a once-acclaimed mentor of mathematicians from underrepresented communities who resigned in 2019 after a complaint was filed against him by a student under his watch for maintaining a "hostile work environment" and participating in "workplace harassment." The two writers chronicle the "dark side" of Castillo-Chavez's success and passion for diversity with stories from his former students and colleagues: "namely, an intolerance for disagreement and a penchant for bullying students and associates," Stellino and Mervis wrote.

After several posts on social media regarding racist and homophobic comments reportedly made by a former Cronkite dean-to-be went viral this past summer, The State Press launched an investigation and found over 20 of her current and former students reported her exhibiting similar discriminatory behavior toward them and their peers. Piper Hansen and Wyatt Myskow tell the stories of those many students, with one former student saying "to have her be a dean of students in our current climate in 2020 would be a disservice to their education.”

The Black Lives Matter movement, and why we need to lean in | Camden Beal

In a concise, yet powerful, statement, Camden Beal writes how emotions brought about by the Black Lives Matter movement need to be channeled with mindfulness of the present and its place in time. Times of pain is where "the true nature of the human condition reveals itself," a realization necessary for change, "And change needs to come now," Beal writes.

'Michael Crow has got to go': Students chant as they protest injustice at ASU | Wyatt Myskow and Erin Galindo

Amid racial justice protests occurring across the country, hundreds of ASU students, alumni and community members marched to demand a Multicultural Center on campus, The University's police department to be defunded and more equitable hiring practices for faculty of color. Wyatt Myskow and Erin Galindo take you into the heart of the march and the people leading the calls for change at ASU.

As students prepared to return to campus for the fall semester, community assistants quit over the University's response to health concerns students had with performing their job in the pandemic, with Piper Hansen writing the students "describe the handling of their concerns as unorganized, unresponsive and immature." Follow Hansen as she details how community assistants saw changes in their contracts and responsibilities with little communication regarding protocol.

Letter from the Diversity Officer: Existence is resistance | Farah Eltohamy

Samantha Chow captures funny poses, striking colors and the emotions of students amid the pandemic through her lens from the window during her 14-day quarantine in a Taylor Place dorm. Chow pictures the distant points of contact with others and her own experience of isolation, representative of many students' experiences in the Fall 2020 semester.

Construction of a wall on the U.S.-Mexico border included building on the land of A'al Vappia, also known as Quitobaquito Springs, an oasis sacred to the Hia-Ced O'odham. Erin Galindo puts us in the eyes of Lourdes Pereira and how her discovery of Voices of O'odham Students at ASU helped her realized she does not face the challenges of preserving the oasis alone.

Months-long reporting into COVID-19 isolation and quarantine protocol at ASU led to the discovery of a breakdown of communication between desk assistants at Palo Verde West and the University. Read along as Wyatt Myskow details desk assistants' encounters with students who tested positive for COVID-19, with one saying they were "the last resort for COVID students" for providing information regarding moving into an isolation space.

The mission at hand | Itzia Crespo

After many mission trips were canceled due to the global pandemic, faith-based organizations revisited the values behind traveling across the world for service-work travel. Diving into the complex history and motives of these far-away trips, this piece looks into Christian missions and one professor's reckoning with these travels' "colonial baggage." "Voyeuristic tendencies do not often create a symbiotic connection," Itzia Crespo writes.

When the COVID-19 pandemic hit earlier this year, Robert Swoboda needed to find a way to support himself after losing his job. Drake Presto documents Swoboda's story of how he sold vintage clothes to make money and turning it into partnering to create a street market to help himself, other artists and vendors engage the Phoenix community.

'Most of us are really, really suffering': Students, faculty say semester was unsuccessful | Wyatt Myskow

Students and faculty expressed the struggles of the fall semester in a poignant piece by Wyatt Myskow. "It was stress-inducing; faculty felt voiceless; students failed courses for the first time; students learned little; there were no breaks to decompress; finals week was a disaster; ultimately, thousands still got sick despite the University's efforts and what health experts said was successful management of the virus," Myskow writes.

After a survivor of an on-campus sexual assault went public with her rape story and reporting experience, an investigation by The State Press found investigatory practices used by the University and its police department often didn't deliver justice and left survivors traumatized. Months of reporting from Piper Hansen, Andrew Onodera and Wyatt Myskow uncover investigation processes the University and ASU Police Department use and the resulting trends it produced.

Was there something we missed in 2020? Let us know by emailing editor.statepress@gmail.com. Continue supporting student journalism and donate to The State Press today.