Over 100 members of the Jewish community and their allies rallied Thursday against antisemitic flyers found around campus on Monday.

Speakers at the event condemned antisemitic images around campus and called for solidarity with the Jewish community. The Jewish & Proud Rally was organized by students Madeline Salvatierra, a senior studying business law, and Emily Singer, a senior studying landscape architecture.

"We intentionally wanted to engage both Jewish and non-Jewish students because an important step in combating antisemitism is engaging with allies," Salvatierra said. "Something that really stuck out to me about this week's antisemitic incident was that for the most part, it was Jewish students who saw the flyers and reported them. How many other students saw them and didn't say anything?"

The flyers were seen at Hassayampa Academic Village and near the H.B. Farmer Education Building on the Tempe campus. The flyers depicted antisemitic stereotypes and said "Happy Halloween from College Republicans United." 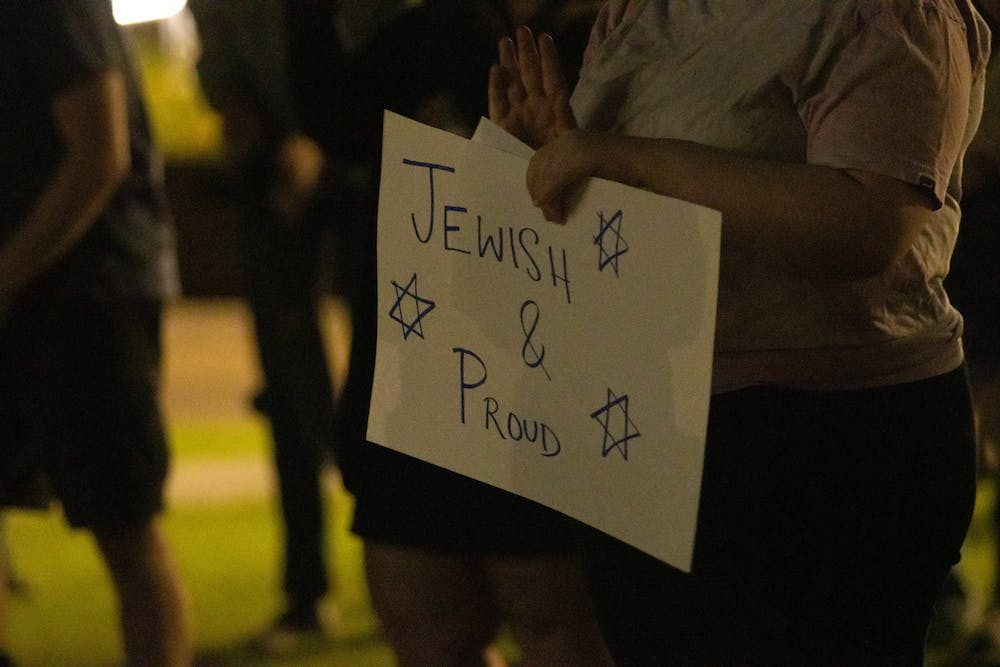 A demonstrator holds a sign on Hayden Lawn during the Jewish & Proud Rally.

College Republicans United broke off from College Republicans at ASU as a more Trump-oriented organization in 2018. CRU denied involvement with the flyers and denounced the antisemitic content. CRU is not a recognized club by the University.

Madeleine Steppel, a sophomore studying journalism and mass communication and religious studies, spoke at the event. Steppel is a representative for Olami ASU, an on-campus organization delivering learning opportunities for Jewish students.

"We must take action as a campus to ensure that the ASU administration takes this incident seriously, now and for any future hateful attack by making public official statements denouncing it," Steppel said. "The appropriate offices must open investigations."

ASU President Michael Crow has not made a public statement about this incident in particular. A webpage dedicated to previous statements from the University says it "has a long history of opposing anti-Semitic rhetoric and acts of intimidation whether they occur on our campuses, or in the community." 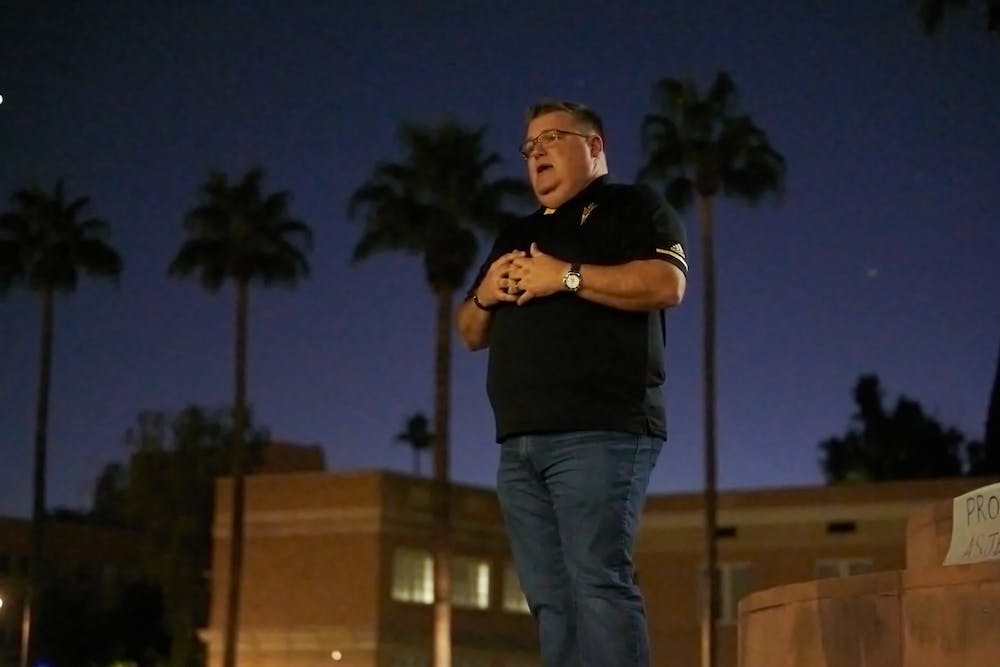 ASU Chief of Police Michael Thompson speaks to the crowd at the Jewish & Proud Rally.

The ASU police department and the Dean of Students Office are investigating the flyers.

"Anytime that we have any kind of hate flyers or speech or anything like that, it leads us to be concerned because there's a potential for something to follow," Thompson said. "I'm not Jewish, that does not mean that I am blind to the beauty of this religion and to the people."

"This was just only the latest of several antisemitic incidents on the ASU campus. It is hateful and wrong whenever any one group attacks another group," Lieberman said.

The discovery of the flyers was the third reported antisemitic incident on the Tempe campus in the past two years. In 2020, Nazi posters praising Hitler were posted around campus, and in 2019, posters with a swastika were found.

Brandon Gross, who represented the Dean of Students Office at the event, said students who were negatively impacted by messages on the flyers should reach out to campus resources.

"If there's anything that we can do in the Dean of Students Office and our student connection and community team, or ASU in general, please feel free to reach out to us. We stand with you. We are allies, and we understand the impact," Gross said.

Rabbi Shmuel Tiechtel, the founding director of Chabad at ASU, a Jewish student organization on campus, said the ASU administration has been supportive of the Jewish community since the flyers were found.

"ASU leadership — Dr. Crow and downward — is really supportive of every community," Tiechtel said. "And as the longest serving active Jewish leader on campus, I can tell you (they are) very supportive of the needs of the Jewish community."

He reached out to University administrators and met with them Wednesday to address the concerns of students. He also met with the Council of Religious Advisors at ASU, "and many of the religious leaders really expressed their support," Tiechtel said.

Tiechtel also called for increased unity and said Jewish students should show pride in their identity.