The ASU football team had no problem celebrating the return of college football with a 40-3 rout against the NAU Lumberjacks at Sun Devil Stadium last Thursday.

As the Sun Devils entered the field for the first time this season, the student section was ecstatic as lightning flickered above the stadium. The tone was set and in his first game at quarterback, redshirt junior transfer Emory Jones made sure to take it all in.

"That was one of the best entrances I have ever experienced," Jones said in a press conference after the game. "Even as a captain on the sidelines watching it. The fans were loud and very active. I feel that it definitely affected the game." 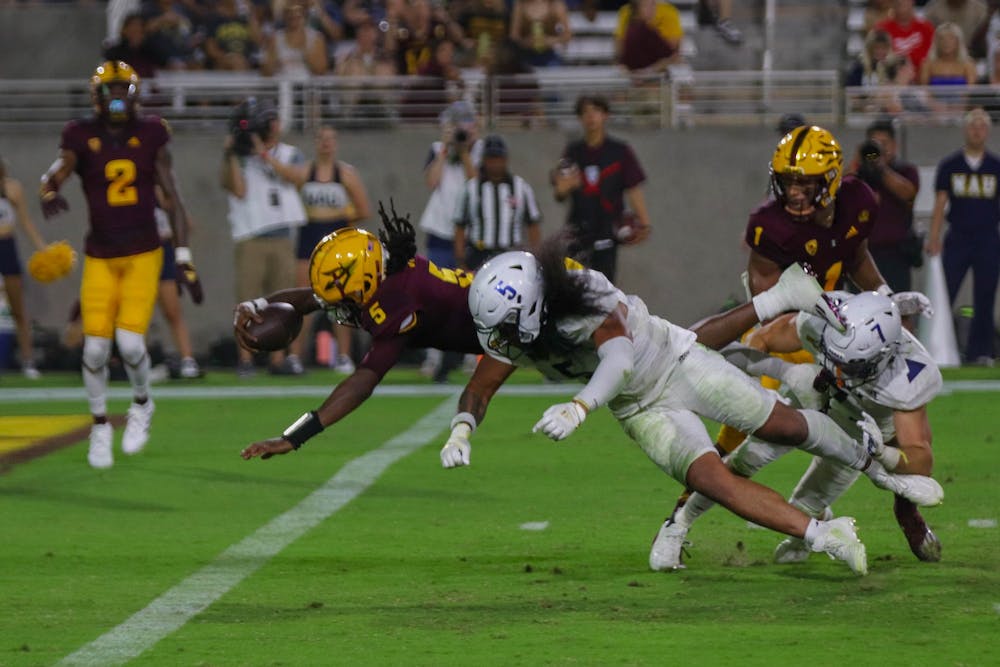 However, lightning didn't strike for Jones and the Sun Devil offense until the second quarter. ASU only scored three points in the first quarter against a supposedly subpar Lumberjack defense.

Jones described the team's feelings in the first quarter as "amped-up" and "antsy," and it led to a few miscues on the offensive side of the football.

When the team finally found its footing, they hit the ground running. The Sun Devils scored three touchdowns in 10 minutes to make the score 24-3 going into the half, courtesy of two rushing touchdowns by Jones. Another rushing touchdown came from fellow newcomer and starting running back Xazavian Valladay, a graduate student, who finished the night with two touchdowns on 116 yards rushing.

"It was a great feeling to be back on the field with my new family," Valladay said. "We keep telling people how excited about this new football team with running and passing the ball."

Jones finished his Sun Devil debut with 152 passing yards and 48 yards on the ground. Despite going 13 for 18 — completing 72% of passes — Jones thought he could’ve done better slinging the ball, saying that it was "a learning experience" and he "took a couple of shots I would want back."

The second half continued the same trends as the second quarter with a 27-yard rushing touchdown three minutes in by Valladay to put the Devils up by 28 points.

From there, freshman Carter Brown had a busy second half. He kicked three field goals and finished four for four in his first outing with the Sun Devils. His performance earned him Pac-12 Special Teams Player of the Week.

On the other side of the ball, the Sun Devil defense was quite resilient all night. They only allowed 38 total yards and shut out NAU the entire second half to seal the game for ASU.

There were lots of questions about the defensive back unit going into the game for Coach Herm Edwards, and it seems with this performance some were answered.

"We went into the game with the objective of not letting them have any vertical passes, and we accomplished that," Edwards said. "For the cornerbacks, that's what I wanted to see." 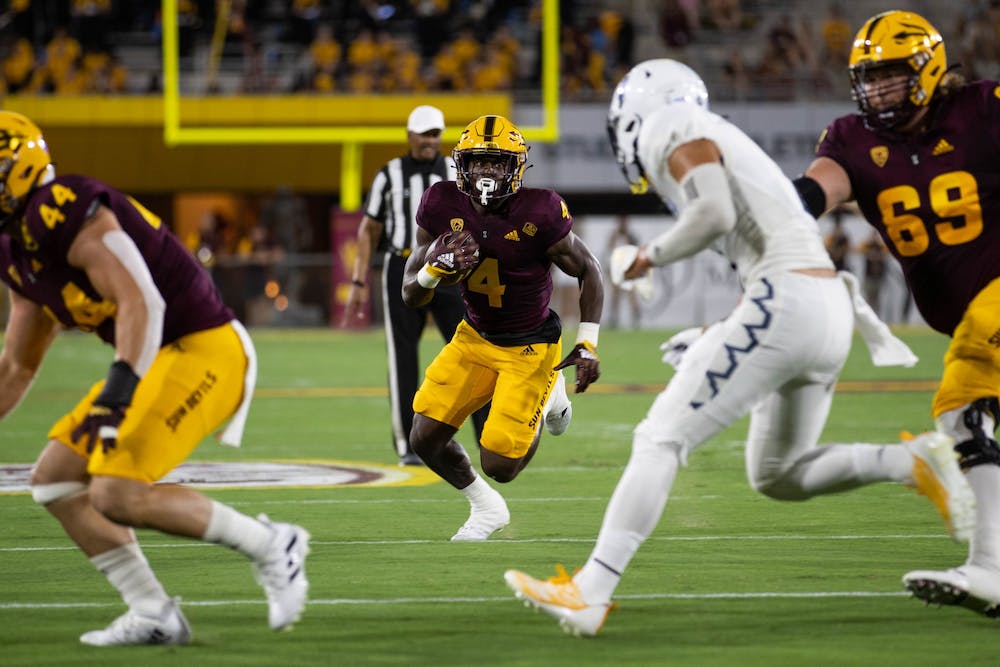 ASU redshirt sophomore running back Daniyel Ngata (4) looks for an opening during the game against NAU. ASU won 40-3 at Sun Devil Stadium on Thursday, Sep. 1, 2022.

Despite their excellent performance, the defense had two pick sixes called off because of penalties after the interceptions. Penalties on defense have been a huge concern for Edwards and the Sun Devil defense since last year's flag fiascos against BYU and Utah.

"We scored two touchdowns on defense and they both got called back," Edwards said. "There are a lot of things to still work on, but to hold a team to three points is always a good night for defense."

The Sun Devils go to Stillwater, Oklahoma Saturday in a test this season against No.12 Oklahoma State.