The Arizona Board of Regents, the governing board for Arizona's universities, approved a pay raise and contract extensions for the presidents of ASU, UA and NAU earlier this month. This means ASU’s President Michael Crow will be among them. These raises are approved based on goal achievement for the universities. The board voted unanimously to approve this increase, and no questions or comments were raised in the meeting before the vote.

“We’re proud to recognize the excellence of our outstanding university presidents," said ABOR Chair Lyndel Manson in an emailed statement. "Our presidents are charged with nothing less than ensuring the universities achieve new heights in access for Arizona students, academics, research, and innovation on behalf of the citizens of Arizona and future generations of students."

Crow's newly approved salary features a 5% increase from his former paycheck, making his base salary $809,846. His contract has been extended by a year, which now goes to 2027. In addition to the raise, Crow and the other presidents are provided with allowances for housing and vehicle use, as well as potential bonuses for achieving additional goals.

For ASU, these goals include creating a "premium brand" for the online branch of the University, launching a plan to make the W.P. Carey School of Business, the Fulton Schools of Engineering and Barrett, The Honors College global brands, and forming a "health futures strategy" that would include the opening of a public health technology school. 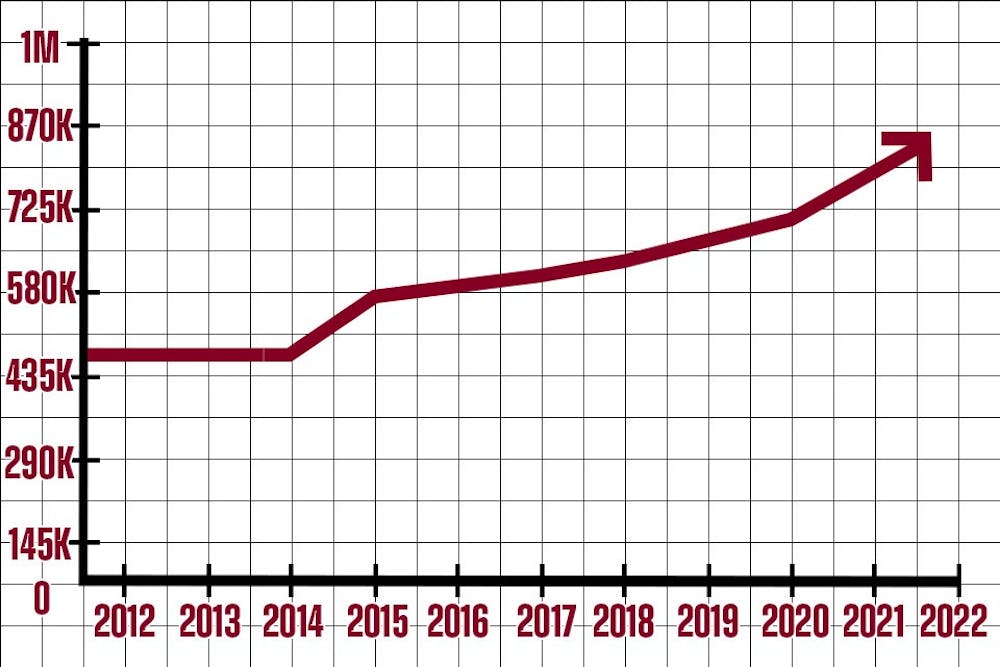 Reece Andrews
Illustration of Michael Crow's salary over the past ten years.

Crow stands to earn an additional $50,000 for the completion of each goal. He has also been given five three-year goals, one of which is increasing student enrollment in adaptive learning courses, each for which he can earn up to an additional $35,000.

Crow received a $90,000 bonus for the 2021-2022 school year for completing similar goals, such as the creation of a strategy to lower education gaps in Arizona and planning the launch of a new "future science and technology center" for ASU's engineering school.

Despite Crow's accomplishments with checking off the goals the ABOR gives him, many students haven’t noticed a difference in the quality of their education.

Students on the ASU subreddit also criticized some of the goals outlined for Crow, especially the goal to increase student enrollment.

"Increase student enrollment? I know some people who are still on the wait list for a dorm this semester because they're all full," one user commented.

This bonus comes following a slight tuition increase made by ABOR in the spring for the 2022-2023 school year, in which students saw an increase between 2 to 5%, depending on their residency and whether they were an undergraduate or graduate student.

Even before the raise, Crow has become one of the highest-paid public university presidents in the country, ranking at number 11 according to a list from the Chronicle of Higher Education. Additionally, Crow has become one of the top 10 highest-paid Arizona state government employees, a list that is comprised entirely of state university employees.