The council has two co-chairs and 20 committee members made up of staff, faculty and students

ASU President Michael Crow announced the members of the University's Advisory Council on African American Affairs in an email Monday.

Colleen Jennings-Roggensack, vice president of ASU Cultural Affairs, and Jeffrey Wilson, a professor of economics, will co-chair the new council.

"As educators, leaders and learners we have a responsibility to serve and better our communities," Wilson wrote in an emailed statement. "We look forward to collaborating with other members of the ASU community to share this work through ongoing learning, reflection, and action."

The council consists of 22 members from the ASU community: 10 faculty, six staff and six students.

The Black African Coalition had two of its members named to the student committee. The coalition declined to comment for this article due to a boycott against The State Press regarding the firing of former opinion columnist Alexia Isais.

The council will work to implement the 25 action items aimed at supporting BIPOC students and faculty that were proposed by Crow on Sept. 2.

The action items include increasing efforts to hire more faculty of color, plans to build a multicultural center and establishing a requirement that ASU police officers hold at least a bachelor's degree. 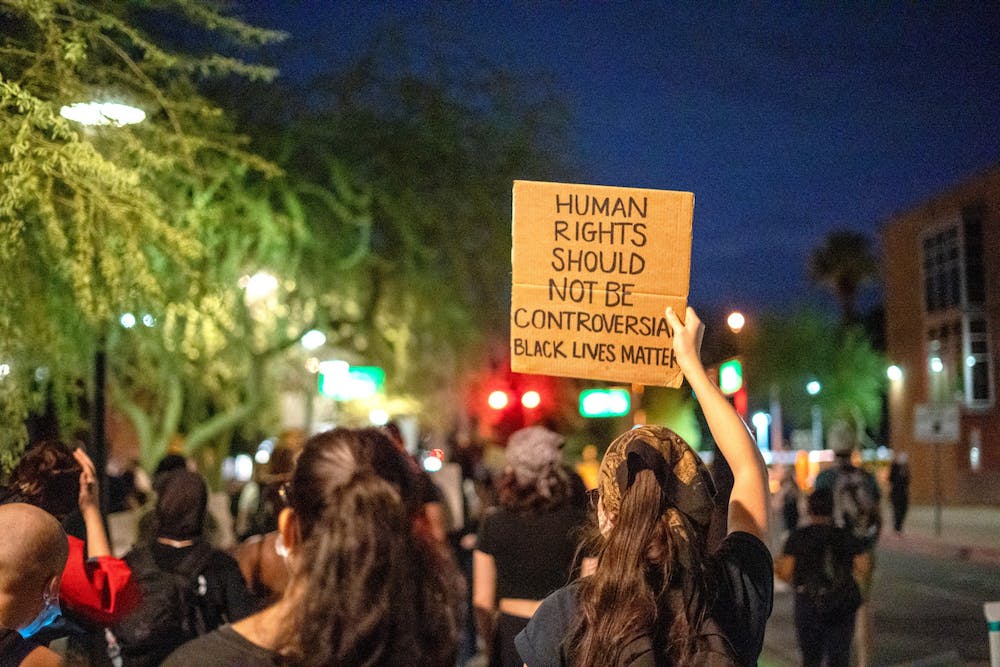 A protester marches toward ASU PD holding a sign which reads "human rights should not be controversial, Black lives matter,” during the Multicultural Solidarity Coalition protest on ASU’s Tempe campus on Aug. 30, 2020, in Tempe, Arizona.

"Together we will draw from our shared knowledge and lived experiences to evaluate and develop all of the possible ways that we can overcome the systemic issues of racism and injustice," Crow said in the email Monday.

The University and the council are planning to host a number of town halls to address the various action items between now and July 2021, one of which will be a "deeper discussion about why we are embarking on this work now," Crow wrote.

Crow added the University is committed to the ASU community as a whole, but "this particular moment in time calls for heightened focus on the Black community," and the council "invites the interest and support" of those who want to ensure "the success and growth of Black faculty, staff and students."

In a meeting last month with The State Press, Crow said there are at least 100 related projects being taken at the individual college levels in addition to the University's plans. Crow said "everybody's voice will be heard" during the process of implementing the action items.

A data committee will be in charge of documenting and publicizing the progress being made on each action item. A new website was also established that is dedicated to the University's efforts.

"We know that this work is not finite," Crow wrote in the email. "It is evolving and will continue to do so."

Prior to the announcement of ASU's 25 action items, members of the Multicultural Solidarity Coalition held a protest at the beginning of the fall semester where students marched from Daley Park to Cady Mall.

READ MORE: 'Michael Crow has got to go': Students chant as they protest injustice at ASU

Among the group's requests were the construction of a multicultural center and the defunding of the campus police department. Two student members of the coalition have been named part of the council.

Crow said at a student forum following the protest that the action items were constructed in response to "every kernel of input" from student government leaders, student coalitions, protesters and those who responded to an earlier call for feedback over summer break.