Mirabella at ASU, a luxury high-rise retirement complex on Mill Avenue, is suing Shady Park over its noisy electronic dance music concerts, claiming the live music is negatively impacting the health and welfare of residents.

The complex, along with several residents, is requesting the venue reduce its bass emissions and stay under the city's noise ordinance limits, which two private "acoustical experts" found the venue to be in violation of, according to documents filed by Mirabella's legal representatives in Maricopa County Superior Court in October.

Mirabella requested a temporary restraining order and preliminary injunction that would prohibit Shady Park from emitting noise above a certain level set by city code if approved by a judge.

In the first hearing Friday morning, the judge denied Mirabella's request to impose a temporary restraining order on Shady Park.

The city of Tempe has yet to issue a noise violation for Shady Park, and Mirabella residents are the only ones complaining, according to documents filed on Shady Park's behalf in response to Mirabella's request.

Mirabella said in a statement it worked with Shady Park for seven months to resolve the venue's "unnecessary and excessive noise" but is now seeking an injunction "to protect the health and welfare of our residents."

According to documents Mirabella submitted, its residents, all over 62 years old, have been suffering from a lack of sleep and increased anxiety because of the "pounding and throbbing" music. Some residents have described the noise as "unbearable," and one reported their electric bed would turn on and adjust in the middle of the night as a result of the bass vibrations.

Tempe police investigated the noise complaints and found "the music was at a reasonable level" while the officer was in one of the Mirabella apartments, a police report included in documents submitted by Shady Park said.

Scott Price, owner of Shady Park, said in a statement his venue is very disappointed that Mirabella decided to file the lawsuit. "For months, we have voluntarily put a lot of time, energy and financial resources into mitigating any sound that comes from Shady Park."

Residents began moving into the newly finished retirement home in December 2020 during a peak of COVID-19 cases and a lack of live music. Six months later, Shady Park began hosting concerts again after a 14-month hiatus, and the complaints from Mirabella residents shortly followed.

In June, Shady Park posted about the noise complaints they were facing from their new neighbors and the "aggressive campaign" residents started in an attempt to shut down the live music. Fans flocked to the venue's defense; they started a change.org petition to #SaveShadyPark that garnered 5,000 signatures in a day. Tempe officials were working with the venue "to find a long term solution," the press release said.

In July, Shady Park paused live music to construct sound mitigation measures. The venue added a canopy to the outdoor music area, acoustic panels and other materials meant to lower the ambient noise to the outdoors, Price said. Live concerts resumed on Sept. 9.

Over the two months the venue was closed, Shady Park paid staff's wages and spent around $300,000 to install the structure, court documents said.

Documents submitted by Mirabella show it partnered with two separate acoustical experts "who collected and analyzed acoustical data regarding excessive noise originating from Shady Park," in mid-September to early October.

"I am a native New Yorker and lived and worked in Manhattan for several years, on a block with a pub on the corner and a fire station down the street, and I never had to deal with this level of disruption to my work and sleep. I am not trying to shut Shady Park down," Edward Kavazanjian, a Mirabella resident and regents professor at the School of Sustainable Engineering and the Built Environment, said in a written comment. "I am simply asking that they comply with the law."

Despite Mirabella's acoustical experts' findings, Shady Park has never been cited for violating Tempe's noise ordinance, according to Price and the answer filed on behalf of the venue.

Lowering the volume isn't a simple solution, either.

"Turning down the volume of the music would affect the quality of Shady Park’s product and deter patrons from attending the events," the attorney representing Shady Park wrote in the answer. "In turn, artists would be less willing to play at Shady Park if they had to compromise their art by playing music that could not be heard over the din of the crowd or was otherwise of poor quality compared to other venues." 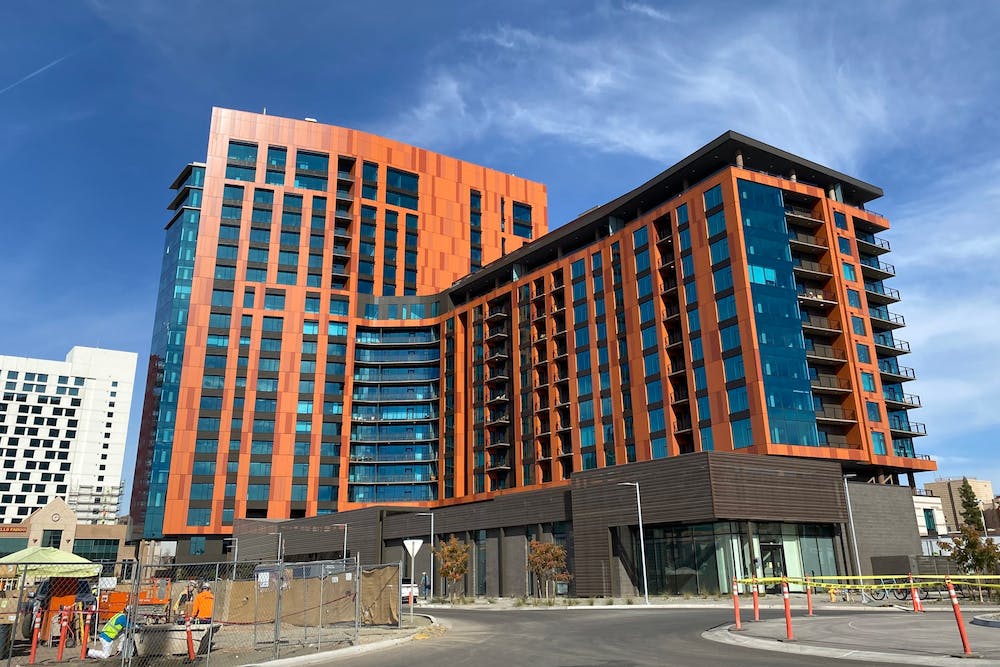 The Mirabella at ASU, a retirement home near the Tempe campus, is pictured on Jan. 13, 2021. Residents began moving into the Mirabella at a rate of four residents per day on Dec. 28, 2020.

Shady Park says it's a product of location. It has been in the same venue for seven years, and noise has never been an issue to other surrounding businesses.

"We have never been cited for noise by the Tempe Police Department," Price said. "We have had zero complaints from the hotel next door and the high rise adjacent to us, both of which are actually closer to Shady Park than Mirabella."

The 20-story retirement complex sits on the corner of University Drive and Mill Avenue, about 100 feet from Shady Park and a street away from a street lined with bars and clubs buzzing with nightlife.

"We are doing everything we can to be good neighbors here," Price said. "It's unfortunate that Mirabella picked a location in the middle of the Tempe urban core and entertainment district, and now wants their neighbors to adapt to their requests."

Mirabella offered to pay for all sound-mitigation costs for the venue, and it has spent over $1 million in window upgrades to mitigate sound, according to a Mirabella webpage dedicated to Shady Park's noise.

The original complaint was filed Oct. 15 against Diamond Juice, a Tempe talent buying and production company that assists in putting on Shady Park shows. An amended complaint filed Oct. 28 replaced the defendant with Peacocks Unlimited LLC, the company that owns Shady Park.

The first hearings for the case, a return hearing and oral argument, was scheduled for Nov. 5.

"As an ASU graduate, I love the University," Price said. "By no means do I view them as the enemy. But unfortunately, we have been dragged into this lawsuit, and now we're forced to defend ourselves."

Senior reporter Morgan Fischer contributed to the reporting of this article.

Update: This story was updated at 2:55 p.m. to include information on the first court hearing.