ASU football head coach Herm Edwards is stepping down from his position after four seasons and three games with the program, according to statements released from the athletic department on Sunday afternoon.

"By mutual agreement, Coach Edwards and I have determined that he will relinquish duties as our head coach," said Ray Anderson, vice president of University athletics, in a statement posted to social media. "At the core of this is doing what is best for our current team, staff, and university."

ASU's football coaching staff and players have been informed Edwards will no longer be with the program, according to other news outlets. The decision comes following the 30-21 loss to Eastern Michigan Saturday night.

"There are a lot of folks who think this is a very coveted job, and frankly, there's going to be a lot of interest," Anderson said during a press conference Sunday afternoon. "We'll have a lot of different types of candidates." 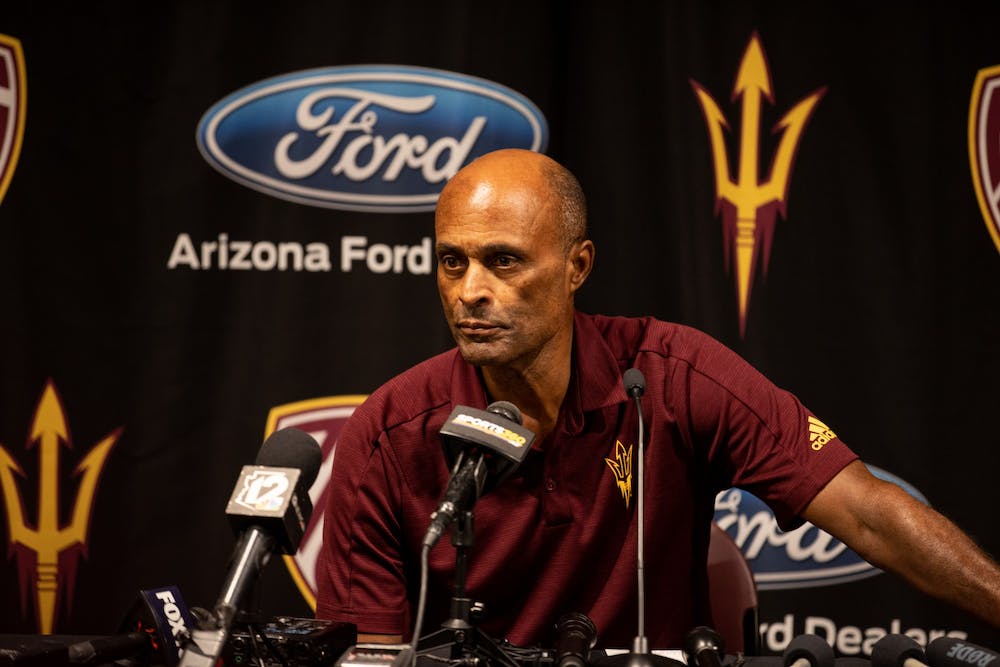 Jason White
Ray Anderson takes questions after announcing that Herm Edwards is no longer the head coach of ASU football on Sunday, Sept.18, 2022.

ASU wouldn't comment on any potential payout or the role of the pending NCAA investigation into potential recruiting violations in Edwards' stepping down at a press conference held Sunday afternoon.

"Herm did not resign. He was not dismissed," Anderson said at the press conference. "We agreed to a mutual relinquishment of duties, and we'll have to work through what all of that means at the end of the day."

After being fired following six seasons, now former head coach Todd Graham was offered a $12 million payout for the remainder of his contract. According to The State Press salary database, Edwards was making $3.7 million in 2021. He signed a two-year extension in January 2020, extending his deal into December 2024.

"I understand the frustrations out there," Anderson said in the statement. "We must do better and that starts with our decision today."

Assistant and running backs coach Shaun Aguano will be the interim head coach following Edwards' departure, according to other news outlets. Aguano joined the program in January 2019.

"Shaun is very deserving of this opportunity," Anderson said at a press conference Sunday afternoon. "His fellow coaches are fully supportive of him. We don't anticipate any staff changes."

"There can be quick fixes," said ASU President Michael Crow after Satuday's game. "There are several types of those, so we'll just have to see where we're headed."

Edwards was announced as the 24th head coach in December 2017. During his time at ASU, Edwards went 26-20 with three bowl appearances in his time as the Sun Devils' head coach.

Edwards spent eight years as an NFL head coach with the New York Jets (2001-2005) and the Kansas City Chiefs (2006-2008). In that time, he led his teams to four playoff appearances. He is one of four coaches to lead two different teams to the playoffs in his first season with a team.

He played for 10 years in the NFL as an undrafted free agent. He played for nine years with the Philadelphia Eagles as a defensive back and totaled 38 interceptions.

Reporter Vinny Deangelis contributed to the reporting of this story.

This is a developing story and we will update this page as we know more. It was last updated on Sept. 18 at 4:20 p.m. to include information from a press conference and more context about Edwards' history as head coach. Edited by Piper Hansen.